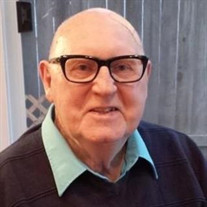 William Frederick Ratter, 88, was born in Charleroi, Pa. and passed away on February 4, 2017 at home in Napa, California. He is survived by his wife of 60 years, Mary Ann and six children. Melissa A. Welch (Richard), Joel F. Ratter (Jocelyn ), Jeffrey S. Ratter ( Cynthia ), Jonathan W. Ratter, Stephen K. Ratter (Max). Grandchildren Katherine, Miranda, Erik, Edward, Kendall, and Rhiannon. Bill graduated from Wittenburg College in Springfield, Ohio and then served in the Army. As a Physicist, his career led him to several defense companies. These included Bell Aerospace, Raytheon, and Westinghouse among others. He retired from Hughes Aircraft as a Senior Scientist. He had a lifelong love and interest in music. He was active in each and every Parish Choir as the family moved around the country. He sang in Barbershop Quartets, the Annapolis Symphony Choir, and especially enjoyed the Santa Barbara Mission Choir. His heartfelt interest was being involved in his children’s activities. He was a Boy Scout Leader, a 4- H Leader, and a Baseball coach. He avidly followed his children and grandchildren sports teams from grade school through college. He traveled extensively throughout the U.S., played bridge and tried to never miss seeing a S.F. Giants Baseball Game. He was a kind and generous man with a “helping hand” for anyone in need. Along with his wife, he was a member of The Catholic Charities and assisted with “Meals on Wheels” deliveries. Bill could repair anything and thoroughly enjoyed electronics , aviation, astronomy, history, and painting/drawing. A Funeral Mass to honor Bill’s Life and Legacy will be Thursday February 9th, 2017 at 1 PM at St. Apollinaris Catholic Church. Burial will be private with the family. A heartfelt thank you to the Staff of 2 North at The Queen of the Valley Hospital. The family also appreciates the outstanding caregivers at The Aegis Assisted Living Facility. In particular, the Manager, Mr. Paul Oseso. Memorial donations in Bill’s name may be sent to the Napa Valley Food Bank or The Salvation Army or a charity of your choice.

William Frederick Ratter, 88, was born in Charleroi, Pa. and passed away on February 4, 2017 at home in Napa, California. He is survived by his wife of 60 years, Mary Ann and six children. Melissa A. Welch (Richard), Joel F. Ratter (Jocelyn... View Obituary & Service Information

The family of William Frederick Ratter created this Life Tributes page to make it easy to share your memories.

William Frederick Ratter, 88, was born in Charleroi, Pa. and...

Send flowers to the Ratter family.