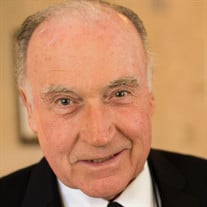 William Patrick Jovick (SFFD, ret.) (August 3, 1940 – November 29, 2021) Passed away in Napa, CA on November 29, 2021. Born William Patrick Jovick in Butte, MT on August 3, 1940, “Bill” to his family and friends, moved to San Francisco at the age of three and resided in the Sunset District. He attended St. Anne’s Catholic Grammar School, Archbishop Riordan High School and San Francisco State University. After a year at SF State, he enlisted in the US Army and served three years stationed in Germany as an Infantry Sergeant. Upon his return from active military service, he became a journeyman electrician in San Francisco and worked as an electrical contractor with his own business throughout his life. Bill became a proud member of the San Francisco Fire Department in 1965 providing 29 years of service to the department with ranks as a Firefighter, Arson Investigator, Lieutenant, and retiring as a Captain of Fire Prevention in 1994. While in the SFFD, Bill earned his AA degree in Fire Science from City College of San Francisco. After retiring from SFFD, he went on to work as the Fire Marshall at the Moscone Convention Center and Bill Graham Civic Auditorium for 10 years. While living in San Francisco, he was an active member of St. Brendan’s School and Parish. Bill loved to play golf. His love of golf started at an early age, caddying throughout SF, playing on the Riordan HS team and one year while at SF State. After the Loma Prieta earthquake in 1989, Bill and his family moved to Napa. Bill was an active member of the Napa community. He was involved in many organizations including the St. John the Baptist Catholic Parish, St. John Men’s Club and Silverado Country Club & Resort. Bill’s greatest loves were spending time with his wife Rochelle (Shelley) and family, traveling around the US and Europe, cooking for his family, yearly vacations to Lake Tahoe and playing as much golf as possible. Bill was a generous and caring man and a great friend to many. Predeceased by his parents, Frank and Margaret Jovick, his brother Francis and his devoted wife of 48 years, Rochelle. Bill was a loving husband, father, son, brother, uncle and friend. Bill is survived by his daughters, Lisa (Aitor Berrueta) and Rochelle (Johnny Italiano); grandchildren, Joseph and Emilia Italiano; sister Margaret (Jovick) Cordes and sister in-law, Angela Donovan; numerous nieces, nephews, cousins, godchildren and friends. A funeral mass will be held on Tuesday, December 7th, at 2pm, at St. John the Baptist Catholic Church, 960 Caymus St., in Napa. A burial service follows on Wednesday, December 8th, at 12pm at Holy Cross Catholic Cemetery, 1500 Mission Road in Colma. In lieu of flowers, donations may be made in Bill’s memory to St. John the Baptist Catholic Church, 960 Caymus St., Napa, CA 94559 or the Sisters of the Presentation Retirement Fund, 2340 Turk Blvd, San Francisco, CA 94118.

The family of William Patrick Jovick (SFFD, ret.) created this Life Tributes page to make it easy to share your memories.