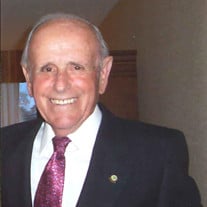 William Romero Garibaldi, age 93 years, of Napa, CA entered into eternal rest on January 7, 2015. Bill is survived by his wife of 57 years, Gloria Garibaldi and children Mitzi Peterson, son-in-law Charles Peterson, David and daughter-in-law Maria Garibaldi. Also survived by his five grandchildren: Kristopher and Shawn Peterson, and Alana, Nicholas and Julia Garibaldi. Willie (as known by his Vallejo family and friends) is also survived by his two sisters: Margaret Anthony (Vallejo) and Joan Herlocker (Green Valley) and many beloved nieces and nephews. Bill was born and raised in Vallejo, graduating from Vallejo High School. Immediately following high school he worked at the family owned Tennessee Street Market up to 1942, upon enlisting in the U.S. Air Force. He served his country as an Aerial Engineer until his honorable discharge in 1945. He then independently opened and operated Garibaldi Motors until he moved to Sacramento, CA. Bill married his loving wife, Gloria, in 1957. Together they moved to Sacramento in 1959 where they built and operated two hotels until their move to Napa in 1975. There he owned and operated A & B Travel Trailer and Motorhomes on First Street and Highway 29, later moving his business to 350 Soscol Avenue, where he retired from in 1992. Bill fully embraced retirement with a heart for traveling and time spent with grandchildren. Bill also enjoyed hunting and fishing with his family and friends. Bill will be remembered as a hard worker, always joyfully willing to offer a hand of assistance to his family and friends. Bill was a lifetime member of: Lodge 832 of the Benevolent and Protective Order of Elks, Napa Sons of Italy, Lodge 2043, Italian Catholic Federation of California, Branch 12, SIR Branch #65, Native Sons of the Golden West, the Vallejo Moose Lodge, #468 and St. Apollinaris Catholic Church, Napa. His humor, generosity, devotion, and selfless spirit will be missed. Visitation will be on Tuesday, January 13, 2015, from 5:00 pm to 8:00 pm at Claffey & Rota Funeral Home, 1975 Main Street, Napa. The family warmly welcomes friends to join them at a Celebration of the Funeral Mass on Wednesday, January 14, 2015, 11:00 am at St. Apollinaris Catholic Church, 3700 Lassen Street, Napa. Which will be followed by a reception at Napa Elks Lodge, 2840 Soscol Avenue, Napa. A private, family service will take place at Tulocay Cemetery. Memorial donations may be offered to the organization of choice in honor of Bill’s community spirit.

The family of William Romero Garibaldi created this Life Tributes page to make it easy to share your memories.

Send flowers to the Garibaldi family.