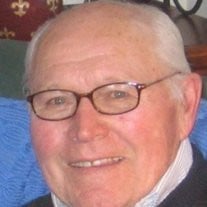 Stephen Anthony Plutt 1917-2013 World War II fighter pilot, beloved father and grandfather, Lt. Col. Stephen Anthony Plutt took his final flight West on Thursday, May 30th with his family by his side. Steve was predeceased by his wife, Carmel Joan Plutt who he met when she was working as a USO volunteer at a pilot training facility in 1942. They married March 29, 1944 at Star of the Sea on a lovely day in San Francisco and remained married for over 59 wonderful years until her passing in January 2004. Steve is also predeceased by sisters Mary Wehrhan, Evelyn Kuth and Anne Perry. He is survived by his brother, Albyn Plutt of Virginia, MN, son Commander Richard Stephen Plutt of San Diego, CA, daughter Carolyn Plutt Hamilton of Napa, his best buddy and grandson Taylor John Hamilton and grandsons Travis Antrim Plutt and Curtiss Plutt. Steve was born July 29, 1917 in Virginia, Minnesota to Stephen and Anna Plutt. After graduation from Roosevelt High School in 1935, Steve joined the United States Air Force and entered some of the best years of his life. Steve proudly served his country for over 20 years as a pilot, including 15 missions over Italy and Greece in World War II flying his favorite aircraft the P-38 Lightening. Steve’s patriotism grew stronger when he crashed landed on October 14, 1943 and had to evade the Nazis, who had overtaken Greece, for 3 months before being rescued by an Italian destroyer. Although humble about his accomplishments during the war, his story has fascinated and inspired friends, family and others throughout the years. After the war, the Air Force sent Steve to Florida to test airplanes. In 1946, he moved his family to Napa, remained in the Air Force Reserve out of Travis Air Force Base and began his post-war civilian job managing the appliance department for Sears in Vallejo. He loved living in the Napa Valley and could not imagine a better place to raise his family and enjoy his retirement years – most recently serving as the Best Man for his grandson Taylor’s wedding. Steve loved being a pilot and continued flying into his 80’s – owning shares of planes with friends at the Napa County Airport. One of his greatest joys was having coffee with “the guys” at the airport. He also enjoyed work around his house and in his yard – priding himself on having the greenest grass on the block. Steve stayed active in the community up until his passing, as a proud parishioner of St. Apollinaris Catholic Church, revered member of the Napa County Pilots Association and Quiet Birdman (San Francisco Hanger). His love of flying transferred over to his family, with his son, Dick becoming a Navy fighter pilot and grandson Travis currently flying with SkyWest and, daughter Carolyn working as a flight attendant for 35 years with TWA. The family wishes to thank Annabelle Alimorong and her husband, Ricardo (aka Rick) along with Maria Alura Mahinay for years of care, compassion and the friendship they showed our father and family. Annabelle took incredible care of Steve and he loved her like a daughter. She and her family are now happily a part of his family. With Steve’s passing, the world lost a true American hero, a paragon of virtue and a member of America’s greatest and bravest generation. He will be forever missed by his friends, family and all who knew him. A celebration of life memorial is being planned for June.

The family of Stephen A. Plutt created this Life Tributes page to make it easy to share your memories.

Send flowers to the Plutt family.