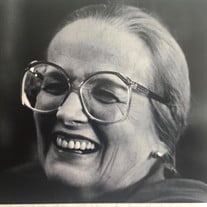 Shirley Anne Canales passed away peacefully on May 24, 2018 at her home in St. Helena with family at her bedside. She lived a full life and left us just 24 days after celebrating her 90th birthday with family and friends. Shirley Anne Hall was born on April 30, 1928 in Southgate, California to Mildred and Monte Hall. She grew up in southern California until moving to Fresno in 1942. Shirley graduated from Fresno High School in 1946 and attended Fresno State College, where she met the love of her life, José Canales. Shirley and José married in 1948 and spent 54 years together until Jose’s passing in 2002. Shirley’s college education was interrupted by the birth of their children and the Korean War, which required the family to relocate to Washington D.C. and then to Hawaii while José served in the Navy. They moved back to Fresno in 1955 and Shirley returned to complete her education at Fresno State in 1965, earning a bachelor’s degree and teaching credential. Shirley began teaching in the Fresno Unified School District in 1968. She taught kindergarten and first grade to hundreds of children in Fresno over the next twenty years. She was a Reading Specialist for the school district and a pioneer in educating Hmong children as they first arrived in the United States from Laos. She was deeply passionate about children’s literature and hosted dinners for many world-renowned authors. A devout Catholic, Shirley was a founding member of St. Paul Newman Center and the Newman Club, and was deeply involved in Parish life. She continued to support and provide input to the Cardinal Newman Library even after moving to St. Helena in 2000. Shirley actively supported numerous community groups, particularly the Fresno Philharmonic, the Fresno Art Museum and the Candlelight Guild. She loved cooking and entertaining in their family home, hosting regular dinner parties where wonderful conversation and idea sharing were the norms. Since childhood, she had an abiding passion for musical theater, taking her children to, “the Best of Broadway” for several seasons. Her greatest cultural passion, however, was the opera. She and José were patrons of the San Francisco Opera for over 40 years, and “Live at the Met” could be heard at high volume throughout their home on Saturday mornings. Shirley had amazing style and an impeccable eye for fashion. During her teaching years, she used her formidable skills as a seamstress that she learned from her mother to fashion her professional wardrobe. She loved to shop and found a willing and able co-conspirator in daughter Tina. Shirley was naturally curious and had a deep lust for knowledge, reading all types of literature throughout her life. Shirley and José travelled extensively and made many friends on their travels. Family was of preeminent importance to Shirley. Early in her life, during the Great Depression, she and her brother Jack Hall went to live with Len and Lula Lytle in Flintridge, California. Shirley became very close to ”Aunt Lula” and regarded son James Richard Lytle as a brother. After she was reunited with her mother, she remained close with the Lytle family and for many years she and José brought their family to southern California to spend summer vacations and Thanksgiving with them. Shirley is survived by her six children, Mark Canales and his wife Pam of Austin, TX, Marta Canales of Walnut Creek, Ana Canales and her husband Bruce Streblow of St. Helena, James Canales of New York, NY, Paul Canales and his wife Mary of Oakland, and Tina Canales and her husband Greg Onken of Berkeley. Shirley is also survived by grandchildren Dagan Janev, Rob Canales, Adeliza Canales Grace, Sam and Ben Canales, Ava and Paloma Canales, Natalie, Isabella and Gigi Onken as well as great-grand children Charlie and Jane Canales, and Tatjana and Lucija Janev. Granddaughter Isabella Onken summed up Shirley by writing, “My Nonna taught me that trust in God will get you further than trust in anything else, that we must always love and honor our family (even when they annoy us), that you deserve to treat yourself once in a while (or really often), and that the perfect Hermes scarf can make any outfit better.” We will miss you mom, Nonna, Shirley and you will never be forgotten … Services will be held at St. Helena Catholic Church on Saturday, June 9, 2018 at 10:30am. A reception will follow. The family requests that donations made in memory of Shirley be sent to the Cardinal Newman Library at St. Paul’s Newman Center, Collabria Hospice in Napa or the donor’s favorite charity.

Shirley Anne Canales passed away peacefully on May 24, 2018 at her home in St. Helena with family at her bedside. She lived a full life and left us just 24 days after celebrating her 90th birthday with family and friends. Shirley Anne Hall... View Obituary & Service Information

The family of Shirley Anne Canales created this Life Tributes page to make it easy to share your memories.

Send flowers to the Canales family.