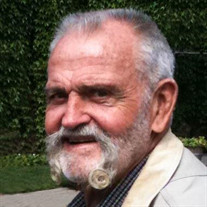 Napa native, Bob Riordan, passed away May 11, 2017, at the age of 88. The youngest of three children, Bob was born at home May 8, 1929 to Marie M. and Daniel P. Riordan. Bob attended St. John the Baptist Catholic Elementary School, and after graduating in 1943, went on to Napa High School where he joined the football team and graduated in 1947. He received his Associates degree from the Napa Valley College in 1949, following which he served in the US Army for two years. For his entire tour of duty, Bob “fought the battle of Waikiki Beach”, while stationed at Schofield Barracks, Oahu, Hawaii, as an artillery instructor. After discharge, Bob worked most of his life as a butcher and a meat cutter, changing careers late in life to work as a truck driver for Sunnyside Farms, which he greatly enjoyed – but retired promptly at age 65 – making certain he did so before anyone had to ask him to….. Some of the greatest joys in his life came from sharing laughs with family, and friends in various groups and clubs. Earning the rank of Eagle Scout as one of 10 boys from Troop 10 in 1946, he could still sing their troop theme song! An avid snow skier until age 76, he was a founding member of the Napa Ski Club, maintaining his membership long after a stroke took his ability to charge the mountain. He adored his Native Sons, with whom he shared many laughs, great meals, and fizzes. Bob loved being outdoors whether it was herding cattle, tinkering with his tools, or hunting with his dear friend Virgil. He also loved boating and waterskiing –probably mostly because that’s how he first met his beloved wife of 59 years. For her, he learned to dance, and the two of them could clear a dance floor with their grace, style, and beaming smiles. Bob was preceded in death by his parents, Dan and Marie Riordan, his brother Dr. Dan Riordan, and his sister Dorothy West Tonascia (who nicknamed him “Boo” as a child, which stuck with him in the family his entire life ….) He is survived by his loving wife Carol, son Tim, daughter and son in law, Kay and Gordon, grandchildren Joshua, Jordan, and Tori, as well as numerous nieces, nephews, grandnieces, grandnephews, great grandnieces, and great grandnephews – all whom he cherished and loved dearly, and joked with and teased mercilessly. At Bob's request, no services will be held. The family asks that donations in Bob’s name be made to: Native Sons of the Golden West #62; Girls Garage, 1380 10th Street, Berkeley, CA 94710 ( http://girlsgarage.org/support/donate/); or The Queen of the Valley Medical Center. (Although Bob would probably tell you to save your money). Having lived a full life in Napa, Bob especially cherished time spent with family and friends, and wanted to say to each of you, “Thanks for the memories!”

Napa native, Bob Riordan, passed away May 11, 2017, at the age of 88. The youngest of three children, Bob was born at home May 8, 1929 to Marie M. and Daniel P. Riordan. Bob attended St. John the Baptist Catholic Elementary School, and after... View Obituary & Service Information

The family of Robert "Bob" Riordan created this Life Tributes page to make it easy to share your memories.

Send flowers to the Riordan family.