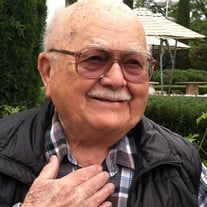 Robert P. Biniek 1918-2014 Robert P. Biniek, 96, passed away on Sunday, June 15, surrounded by his loving family. Born in the small community of Avon, Minnesota, on May 5, 1918, Bob grew up on the family farm with his four brothers and two sisters. Bob served in the U.S. Army in World War II in the 145th Field Artillery Battalion. After basic training, he spent three years in the Pacific in Hawaii, the Marshall Islands, the Mariana Islands, the Philippines, Okinawa and Korea. He was discharged in late 1945 and soon after decided to head west to California and find his faithful correspondent, Lois Melvin. Bob secured a job at Mare Island Naval Shipyard and married Lois on July 6, 1946, at St. Vincent Ferrer Church in Vallejo. In 1950, the couple moved to Napa where they raised their four sons: George, Tom, Bill and Dick. Bob was a member of Veterans of Foreign Wars, a Knight of Columbus, and a Eucharistic Minister at St. Apollinaris. When his sons were young, he was a leader with the Cub Scouts Pack 150. He also managed their baseball teams in the Napa City Fly League. All of the teams were named after insects, and Bob managed the Gnats. Bob retired from Mare Island in 1976, after 30 years at Mare Island. He volunteered at St. Vincent de Paul. Along with his wife, he delivered Meals on Wheels to seniors in Napa for eight years, until he was 90 years of age. Bob was preceded in death by his son, Bill, in 1983 and his loving wife of 62 years, Lois, in 2009. He is survived by sons George, Tom and Richard; daughters-in-law Joanie (Langholff) Biniek and Judy (Biniek) Riley; grandchildren Kristin, Brent, Becky, Brian, Ramona Collier and Connor Riley; and brother George (Avon, Minnesota) and brother Joe and sister-in-law Peggy (Leesburg, Virginia). A funeral Mass will be held on Thursday, June 19, at 12:00pm at St. Apollinaris Catholic Church. In his memory, donations may be made to the St. Apollinaris School Fund, 3700 Lassen St., Napa, CA 94558.

Robert P. Biniek 1918-2014 Robert P. Biniek, 96, passed away on Sunday, June 15, surrounded by his loving family. Born in the small community of Avon, Minnesota, on May 5, 1918, Bob grew up on the family farm with his four brothers and two sisters. Bob... View Obituary & Service Information

The family of Robert P. Biniek created this Life Tributes page to make it easy to share your memories.

Send flowers to the Biniek family.