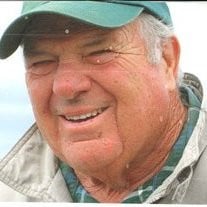 Napa lost one of its classics, Richard (Dick ) Cavagnaro on July 5, 2013. His sudden death came as a shock to his family and friends as he was recovering from a recent heart condition. Dick was born in Napa on May 1, 1939 and attended St. John’s Catholic School, Lincoln Elementary School and then graduated from Napa High in 1957. He graduated from the University of San Francisco in 1961. Dick went on to become President of Ray Cavagnaro Inc/El Ray Distributing founded by his father Raymond, the first beverage company in Napa to sell beer, wine and spirits after prohibition. Under his leadership the family business grew to 120 employees and serviced an area from the south bay to the Oregon border. Dick will always be remembered for his easy style and good humor, he loved the Napa Valley and the Valley loved him. He was a good guy that always made those around him feel comfortable and loved. He knew how to celebrate life and was truly a man who lived in the moment; he maintained many friendships and was always open to exploring new places and people. Along with his wife Carol, they explored many States and countries. He loved to travel with friends and family, making every trip a special occasion. Dick was a founding member of the Napa Valley Education Foundation, Exalted Ruler of Napa Elks Lodge No. 832 and the Justin Siena Sports Association. He was on the Board of Trustees for the Queen of the Valley Hospital, and an Honorary Trustee of the Foundation. Dick was also on the Napa Boys and Girls Club Board of Directors and a lifetime member of the Native Sons of the Gold West. Dick was a member of Ducks Unlimited, and the California Water Fowl Association. He will always be remembered for hosting the Ray Cavagnaro Invitational in Graeagle, and his beloved Kitty Poker Club. He is a proud member of the Jock’s reunion, which meets every year to celebrate their enduring friendships. Dick loved life, and never let any of it slip by. He passed on to his kids, and grandkids, his passion for sports, dominoes, gardening, camping, and cooking. He was an avid golfer at Napa Valley Country Club and played courses all over the Bay Area. His first hole in one at the OD invitational (just last year) was a fitting testament to his love of the game. He was a loyal fan of the Oakland Raiders and the Oakland Athletics. Proud of his Italian heritage, his pesto will surely be missed. Dick was a fair man, loved political discussions and was always up to date on current affairs. He is survived by his loving wife Carol, his sister Joy Tamburelli, his son Ted Cavagnaro (Terri) his three daughters Jill Sickler (Jeff), Jean O’Donnell (Kevin), and Sarah Rodriguez (Carlos). His grandchildren Larissa Fulford(Chad), Jessica Cavagnaro(Stephen), Joshua Cavagnaro, Allie Cavagnaro, Craig , Trevor and Jenny Sickler, Katie and Jack O’Donnell. His great grandchildren: Tyson and Weston Fulford, as well as his first wife Marge Griffin and many nieces and nephews. Dick’s presence and energy will be sorely missed, he leaves his family in grief and in great sorrow. Napa has lost one of its finer boys. Final visitation is available at Claffey and Rota Funeral Home on Tuesday, July 9th, between 12:00 - 5:00 p.m. A service to celebrate Dick's life will be held on Wednesday, July 10th, 10:00 a.m. at St. John's Catholic Church. There will be a reception to follow at Napa Valley Country Club. Memorial donations can be made to the Queen of the Valley Foundation.

Napa lost one of its classics, Richard (Dick ) Cavagnaro on July 5, 2013. His sudden death came as a shock to his family and friends as he was recovering from a recent heart condition. Dick was born in Napa on May 1, 1939 and attended St. John’s... View Obituary & Service Information

The family of Richard Cavagnaro created this Life Tributes page to make it easy to share your memories.

Napa lost one of its classics, Richard (Dick ) Cavagnaro on July...

Send flowers to the Cavagnaro family.