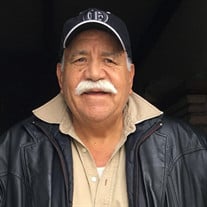 It is with deep sadness that we announce the passing of Pedro Hueso Figueroa, at the age of 71, who died peacefully surrounded by his family on November 12, 2021. Mr. Figueroa was born to Rosendo Figueroa and Amparo Hueso in Jalisco, Mexico on October 19, 1950, and had 8 siblings. Even though he excelled in mathematics and served as a math tutor at the Catholic school he attended, he had to leave his studies after his father passed away when he was only 14 years old. Pedro Figueroa, along with his older siblings, worked hard to provide for his large family. He later immigrated to the United States in 1975. His first job in the U.S.A. was as a Chef at a SoCal Sizzler’s Restaurant, then he was a security guard, then a taxi driver. He ultimately opened and managed a few shoes and clothing stores for several years, one of them was named Zapateria Corcoran. For many years he lived in Pico Rivera, California, then he relocated to the San Joaquin Valley, in 2003, for its peace and tranquility. In his later life he moved to Napa, CA. Pedro H. Figueroa had a tremendous work ethic, a heart of gold and taught his family how hard work, perseverance, gratitude, and humility can make our dreams come true. In his spare time, he enjoyed going to the mountains, especially the Azusa Mountains. Pedro is survived by four siblings: Margarita Figueroa, Antonio Figueroa, Salvador Figueroa, and Maria de Jesus Figueroa. He is survived by his four children: Omar Figueroa Santana, William Figueroa, Betsy Figueroa, and Pedro Figueroa Jr. He is also survived by his 6 grandchildren: Omar Alejandro Figueroa Gonzalez, Myrna Omary Figueroa Gonzalez, Samar Figueroa Gonzalez, Riley Figueroa, Madison Figueroa, and Alicia Gonzales-Figueroa. His family will deeply miss him. May perpetual light always shine upon our beloved Pedro H. Figueroa. A rosary and visitation will be held on Tuesday, November 23rd at 5pm at St. Joan of Arc in Yountville, CA. A Memorial Mass will be held on Wednesday, November 24th at 11am at St. Joan of Arc.

It is with deep sadness that we announce the passing of Pedro Hueso Figueroa, at the age of 71, who died peacefully surrounded by his family on November 12, 2021. Mr. Figueroa was born to Rosendo Figueroa and Amparo Hueso in Jalisco, Mexico... View Obituary & Service Information

The family of Pedro Hueso Figueroa created this Life Tributes page to make it easy to share your memories.

It is with deep sadness that we announce the passing of Pedro...

Send flowers to the Figueroa family.