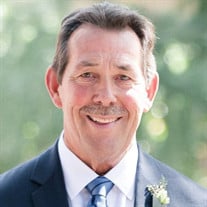 Paul Michael Hoff, 72, passed away peacefully on Saturday November 3, 2018 at his home in Napa, California. Paul was born in Culver City, California on September 27, 1946 to Herman Joseph “Moe” Hoff, Jr. and Virginia Lorene Guinney. He grew up in Van Nuys, California with his three younger siblings, Gary, Judy, and Kurt, and attended St. Elisabeth Catholic School and Notre Dame High School. Paul played on the high school tennis team and was a member of the debate team as well. After high school he attended UC Santa Barbara where he graduated with a degree in Political Science in 1968. While at Santa Barbara he joined the Sigma Chi fraternity and enjoyed playing intramural sports with his brothers who became lifelong friends. He was also a member of the US Army ROTC program, completed officer training, and served as a captain. After college he went on to earn his Juris Doctor degree at UC Hastings College of the Law in San Francisco in 1971. While in law school Paul lived in Berkeley, California, and it was there in 1970 that he met the love of his life, Kathryn Shifflett. Kathryn was an undergraduate student at UC Berkeley at the time. Paul and Kathryn married eachother on April 20, 1974 at St. John’s Catholic Church. They moved to Napa in 1979 after purchasing the prior home of Kathryn’s grandmother, Mary Shifflett, and lived on “the Ranch” for 39 years where they raised their five children. Paul enjoyed the outdoors and took great pride in working on the land, making wine in his garage, and yielding the fruits of his labor in the garden, orchard and vineyard. Paul practiced law for 47 years, first with McNamara, Lewis, and Craddick in Walnut Creek, then at his own practice which he opened in Napa, and finally at Zeller, Hoff, & Zeller where he spent the rest of his career. He handled a wide range of legal issues and was a notable and successful litigator. Paul always did his best to do the right thing and found great reward in helping his clients. Even after being diagnosed with cancer, he never retired from his work as an attorney and remarkably continued helping others until the end of his life. Paul often served and was a lector at Holy Family Mission Church in Rutherford, served as president of the Napa County Bar Association, chair of Day for the Queen charitable fundraiser, and as a Board Member for both Justin-Siena High School and St. Helena Montessori School. Among their many loves, Paul and Kathryn enjoyed attending Cal sporting events with their children and gathering on campus with their “Cal Family”. For 18 years they attended the Lair of the Bear family camp for Cal alumni at Pinecrest Lake where Paul consistently received the camp trophy in horseshoes with his patented single rotation toss. Paul was an avid reader of current events, National Geographic, and Sports Illustrated, and he loved statistics and talk radio. He was also an accomplished runner, completing the 1979 Boston Marathon in 2 hours and 48 minutes. But above all Paul was the quintessential father and family man. He loved spending time with his children and grandchildren on family vacations to Lake Tahoe, Southern California, and Hawaii, and cherished every moment he had with his parents and siblings. He was a man of faith, of hard work, and of love, and an example of goodness to all who knew him. Paul is survived by his wife Kathryn; his daughter Lindsay Keller, her husband Jim and their four children, Charlie, Lauren, James, and Andrew; his daughter Molly Segui, her husband Will, and their two children Kate and Matthew; his son Alex; his daughter Lucy Partridge, her husband Tom and their son Walter; and his son Conor and his wife Tram. A rosary will be held at St. Joan of Arc Catholic Church in Yountville, California on Thursday, November 8th at 7:00 pm. A funeral mass will take place at St. Apollinaris Catholic Church in Napa on Friday, November 9th at 11:00 am. In lieu of flowers, please donate to MD Anderson Cancer Center where Paul received excellent treatment for the past two years. https://gifts.mdanderson.org

The family of Paul Michael Hoff created this Life Tributes page to make it easy to share your memories.

Send flowers to the Hoff family.