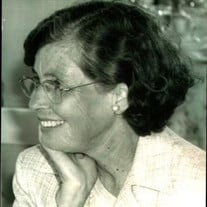 Patricia Streblow was born in Napa, California on August 1, 1928, the eldest daughter of Albert and Wanda (Grigsby) Frommelt. She died on October 27, 2017, at her home in St. Helena, surrounded by family. Patricia attended St. John's Grammar School in Napa and St. Anselm's high School in San Anselmo. In 1950 she graduated from Holy Names College in Oakland, California. She taught second and third grades at Mt. George School in Coombsville in Napa. In 1951 Patricia married Jack Streblow in St. John's Catholic Church in Napa. Jack and Patricia had five sons and were married for forty-one years until Jack's death in 1992. In 1980 the Streblow moved to St. Helena and, with their five sons started a small winery on Spring Mountain. Patricia was predeceased by her husband Jack in 1992, her oldest son, Greg, in 1999, and her brothers John Frommelt and Tom Frommelt. She is survived by her sons, Bruce and his wife, Ana, Brian, Tim, and his wife, Alicia, and Jeff and his wife, Kim and by Kathy, Greg's widow. She is also survived by seven grandchildren, Melissa and her husband Brad Kintzer, Doug and his wife, holly, John, Tyler, Laura, Alexandra and Siena. She is also survived by her great grandson. Her sister Mary Pimental and brother Bob Frommelt also survived her, as well as, several nieces and nephews. The family would like to particularly thank Collabria Hospice and Lauren Robedde for their loving care. A Rosary will be said on Thursday, November 2nd at 6:00pm at St. Helena Catholic Church. The funeral Mass will be on Friday, November 3rd at 10:00am at St. Helena Catholic Church. Memorial donations may be made to Queen of the Valley Hospital Foundation, Justin Sienna Foundation and the Leukemia/ Lymphoma Society.

Patricia Streblow was born in Napa, California on August 1, 1928, the eldest daughter of Albert and Wanda (Grigsby) Frommelt. She died on October 27, 2017, at her home in St. Helena, surrounded by family. Patricia attended St. John's Grammar... View Obituary & Service Information

The family of Patricia Streblow created this Life Tributes page to make it easy to share your memories.

Send flowers to the Streblow family.