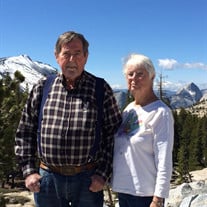 Patricia Ann Parish was born on September 25th, 1935 to Cliffie May Teeple and Arthur Clarence Parish in Modesto, California. They moved to Cupertino to live on 5 acres where Pat developed her strong work ethic from her mother while her father supported the family with odd jobs during the depression. Her life long best friend was her sister Betty Sue with whom she shared many adventures. The family left the Cupertino/ Saratoga area to move to Grants Pass, Oregon where she graduated from Grants Pass High School in 1954. While Pat’s passion was in horticulture her exceptional grades earned her a full scholarship to O’Connor Hospital School of Nursing in San Jose, California. While there her good friend Mary Wilson introduced her to her favorite cousin, Paul Gratton as a pen pal. Their correspondence led to love and eventually marriage on January 26th, 1957. 9 months and 5 minutes later Patricia gave birth to twins, Mary Elizabeth and Virginia Diane; 18 months later their son Holmes David was born. Pat was often caught ditching chores with her nose buried in a book and shared her love of literature by taking her kids to the library weekly. Throughout her life, and until the last few weeks, one could always find 3 books perched on the corner of her desk. She was skilled in sewing and cooking but her gardening skills were exceptional and she could make anything grow. Pat seemed to live at the nursery and looked forward to the San Francisco Flower and Garden Show every year where she introduced her granddaughter to the joys of gardening. Pat leaves a legacy of passion for creation in her children and her grandchildren. She used her nursing skills to head an assisted living facility (Highland) and became a utilization review nurse at the Veterans Home in Yountville for 17 years before retirement. Pat was pre-deceased by her son Holmes David, daughter Mary Elizabeth and husband Paul Gratton. She leaves behind her daughter Virginia, her grandchildren John Gratton (Paige), Ben Betourne (Brandi), Elizabeth Poston (Dan), Tyler Needler (Samantha), Travis Needler (Shelby) and great granddaughter Maggie Poston. The family wishes to give a huge thank you to Collabria Hospice and especially Lorie, who so lovingly and with great respect took such excellent care of Paul and Pat. A funeral mass will be held at St. Johns on August 30th at 10:30 a.m with the wake to follow. Location will be discussed at the mass or call Virginia at 707-287-0738.

Patricia Ann Parish was born on September 25th, 1935 to Cliffie May Teeple and Arthur Clarence Parish in Modesto, California. They moved to Cupertino to live on 5 acres where Pat developed her strong work ethic from her mother while her father... View Obituary & Service Information

The family of Patricia Gratton created this Life Tributes page to make it easy to share your memories.

Send flowers to the Gratton family.