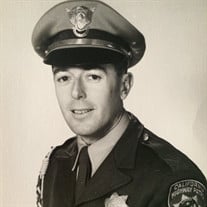 Oliver Howard McCormick passed away on June 30, 2014, at his home in Napa, California, surrounded by his family. He was 87. He was a beloved husband, father, grandfather, great-grandfather, brother, uncle and friend. His kindness, wisdom, and his ability to run a tight ship will be greatly missed. Ollie was born in San Francisco, California, on January 1, 1927, to John and Mary McCormick. He grew up in San Francisco with his sister, Polly. He attended George Washington High School and Cogswell Technical School. He enlisted in the Navy near the end of WW II and served on the USS Boxer aircraft carrier as a crew chief prepping planes for their missions. When he returned, he joined the San Carlos Police Department and began a career in law enforcement. He served as a California Highway Patrol Officer until 1974, during that time he served 8 years as a motor officer. After retiring from the CHP he served as a bailiff for the Napa Courts. Ollie married Dian, his wife of 62 years on March 22, 1952. They eventually made their home in Napa, California, where they raised their five children. He loved spending time at the McCormick Family Cabin in Bolinas which has been a part of his life since 1930’s. He was a really good driving instructor—his kids needed to do a control skid at 55 mph, and even his grandkids needed his seal of approval before they could get their licenses. Oliver enjoyed Harley Davidsons, German shepherds, and snorkeling in Hawaii. When he retired, he learned to fly as a solo glider pilot. He also loved to spend time at Genova’s Deli and Peet’s talking with everyone and drinking coffee. Oliver is survived by his wife, Dian, their children, Mike McCormick (Trisha), Adele Monte (Zane), John McCormick (Paula), Jerry McCormick (Julie), his sister, Polly Day, 14 grandchildren: Mike, Jerry, Leanna, Kevin, Megan, Molly, Miles, Tracy, Christopher, Ben, Jenna, Blake, Josh, and Tyler, 14 great-grandchildren, many good friends and his law enforcement family—you all know who you are. He was predeceased by his daughter, Eileen McCormick. The family will hold a visitation on Sunday, July 6, at Claffey and Rota Funeral Home from 2-7pm. The funeral will be held at St. Mary Magdalene Church in Bolinas, California, on Monday, July 7 at noon. In lieu of flowers donations can be made to Napa Valley Hospice or Native Sons of the Golden West.

Oliver Howard McCormick passed away on June 30, 2014, at his home in Napa, California, surrounded by his family. He was 87. He was a beloved husband, father, grandfather, great-grandfather, brother, uncle and friend. His kindness, wisdom, and... View Obituary & Service Information

The family of Oliver Howard McCormick created this Life Tributes page to make it easy to share your memories.

Send flowers to the McCormick family.