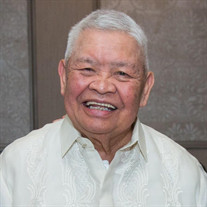 Manuel Santos Ople Sr., known to family and friends as either “Manny” or “Leleng” passed away peacefully at home in Napa, California on November 17th, 2021 after a lengthy battle with Parkinson’s disease. Manny was born in Manila, Philippines on August 20, 1936. He grew up in Quezon City, Philippines and tragically lost both of his parents and 3 brothers during the years of World War II. He was taken in by his uncle Felicisimo Ople Sr., graduated as valedictorian from Capiz High School, went on to attend the University of the Philippines where he earned a bachelor’s degree in Mechanical Engineering and was a proud member of the Beta Epsilon fraternity. After working for Philippine Refining Company, Manny emigrated to the United States to work as an engineer in Silicon Valley where he had a successful career working for several prominent tech companies, including a budding Apple Computer in the early 1980s. Manny lived with his family in San Jose, CA for 30+ years. He retired to Napa in 2000 where he enjoyed entertaining family and friends at innumerable backyard barbecues and holiday celebrations. He volunteered for Meals on Wheels and Auction Napa Valley until the effects of Parkinson’s disease robbed him of his mobility. Manny leaves behind his beloved wife Tessie of 54 years and is survived by his son Manuel “Sean” Ople Jr., daughters Melissa Ople Hopkins and Michele Ople, grandson Emmanuel “Manny” Tran, granddaughters Isabella Hopkins, Katie Hopkins, and Celeste Tran, son-in-law Paul Hopkins, first cousins Felicisimo Ople Jr. and Lucile Guevarra and dozens of nieces, nephews, cousins, and in-laws from Tessie’s side of the family. He was preceded in death by sister Magdalena “Nena” Ople, brothers Miguel Ople Jr., Mariano Ople, Alejandro Ople, and parents Miguel Ople Sr. and Asuncion de los Santos Ople. Manny will be remembered for his extremely generous and hospitable heart, enthusiastic fandom of local sports teams including the San Francisco 49ers and Golden State Warriors, and deep love for his family. A rosary and visitation will be held on Monday, November 22nd at Claffey and Rota Funeral Home, 1975 Main Street, Napa at 12:30 pm. A Memorial Mass will be held at St. Apollinaris Catholic Church at 3700 Lassen St., Napa on Tuesday November 23rd at 10:30 am. Support of the ASPCA in Manny’s name is greatly appreciated.

The family of Manuel Santos Ople created this Life Tributes page to make it easy to share your memories.

Manuel Santos Ople Sr., known to family and friends as either...

Send flowers to the Ople family.