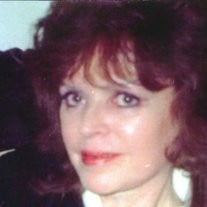 Lynn Marie Hanover 1944-2013 Longtime Napa resident Lynn Marie Hanover, 69, passed away on May 20, 2013, in the arms of her children. Lynn was born in Tomahawk, Wis., in 1944, to Quinten and Bernetta Holte. The family lived in Racine, Wis., and in Colorado Springs and Montrose, Colo., where Lynn graduated from Montrose High School. Lynn attended business school and worked as an administrative assistant at Western State College in Gunnison, Colo. Lynn’s first husband was a logger and avid hunter. In their first years of married life, Lynn had learned a hundred different ways to cook venison and elk. The young couple then moved to California and had two children, Allison Michelle Einboden and Brett Austin Einboden. From the start, it was all about family for Lynn. She adored her children and loved being a homemaker, being a room mom at her children's school and one of those rare adults who enjoyed having plenty of teenagers in her home. Lynn was always a beauty and a girly girl — even at a young age, appearing in old photographs in spotless dresses, hats and polished shoes. Later, the dark-haired teenager would break some hearts before marrying her high school sweetheart, Jack. Lynn loved animals of all kinds, especially wolves and Siamese cats. She and her husband, Don, once drove to Northern Idaho to visit a wolf she had adopted. She also loved Doris Day, Rock Hudson movies, “Dallas,” old Hollywood films, Ricky Nelson, QVC and the beach. Lynn's favorite escape was the Cypress Inn in Carmel, where the family will hold a private celebration of Lynn's life. Feminine, glamorous Lynn was a gentle woman who had a wonderful sense of humor. She would often visit for hours with store clerks and waitresses. Lynn was compassionate and a great listener and touched the soul of everyone she met. Lynn was a woman of faith. One of her happiest days was when she was baptized in the South Platte River in Sterling, Colo., by her Sister Sue and a greatly admired high school friend whom she hadn't seen in 40 years. Lynn is survived by her husband, Donald G. Hanover of Napa; her daughter, Allison Einboden-Hammond; her son, Brett Einboden; three grandchildren, Amanda Einboden, Brett Einboden Jr. and Jack Einboden-Hammond; and two great-grandchildren, Mason Alexander Trueblood, namesake, KaYa Lynn Marie Trueblood; and her sister, Susan Conley of Indian Hills, Colo. Donations in her memory can be sent to the Napa Humane Society, P.O. Box 695, Napa, CA 94559.

The family of Lynn Marie Hanover created this Life Tributes page to make it easy to share your memories.

Send flowers to the Hanover family.