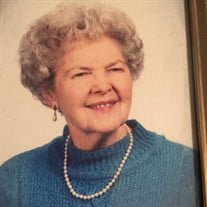 Lorraine Clarke was born on May 27, 1924 to George and Hattie Clarke. She lived at 418 Franklin St. in Napa, CA at the family home, until her marriage to Charles Henry Cowan Jr. on November 27, 1942. When they married, they moved into their new home on Marin St., Napa, CA and she lived there for over 70 years. They raised their three daughters, Susie, Christine and Jeannie there, until they each married. Monte Whitney, Susie's husband, is her only living son-in-law. Lorraine was a devoted wife and mother who loved her family. She was preceded in death by her husband, Charlie, her sister, Roselle Carrington, and her grandson Mark Whitney. Grandchildren were Mark Whitney, Suzanne Hunter, Charlie Pratt, Carrie Ann Lopez, John Escamilla, Rhonda Rohr, Lisa Accettola, Paul Escamilla, Matthew Escamilla and Brandon Cowan, as well as seventeen Great-Grandchildren. She loved all of them dearly! She lived and breathed for her Lord Jesus Christ and studied His Word daily. She instilled this in her children, and was an inspiration and example of a loving Christian to all her family and friends. She loved going to the Christian group, Wings and attending services at Grace Church of the Napa Valley. She also attended the Pacesetters monthly luncheons at the church. Lorraine thoroughly enjoyed league bowling well into her late 80's. She also loved to play ping pong and was a very good player. She attended and graduated from Napa High School in 1942. She played on the women's basketball team and also enjoyed playing tennis. Charlie and Lorraine enjoyed Square-dance, Ballroom dancing, and the East Coast Swing (Jitterbugging that was taught to them by their teenage daughters). Lorraine will be greatly missed by her loving family and friends. We rejoice for her that she is in the Lord's loving arms with her husband and family members who preceded her to heaven. Visitation will be held at Claffey and Rota Funeral Home on October 26, 2016 at 12:00, followed by funeral services at 1:00pm.

Lorraine Clarke was born on May 27, 1924 to George and Hattie Clarke. She lived at 418 Franklin St. in Napa, CA at the family home, until her marriage to Charles Henry Cowan Jr. on November 27, 1942. When they married, they moved into their... View Obituary & Service Information

The family of Lorraine Cowan created this Life Tributes page to make it easy to share your memories.

Send flowers to the Cowan family.