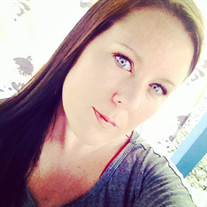 Leigh Nicole McDermott unexpectedly passed away from a sudden illness Sunday Aug.24th 2014. She was born September 2, 1982 to parents Michael and Dawn McDermott in Napa California. Leigh attended Pueblo Vista Elementary, Redwood Middle School and graduated from Vintage High. Leigh attended Solano County J.C. where she graduated with her AA degree in Business. Leigh worked for Robert Mondovi Winery in sales and marketing for 6 years then went to R.E.CHAIX & Associates as an underwriter for 4 years. She retired from her job to care for her mother with Lymphoma. She spent the last few years being a beloved caregiver to her mother Dawn McDermott and grandmother Joan Moskowite. Leigh enjoyed camping in the motorhome with her father and mother, working in the garden at her home, shopping, makeup, spending time with all her friends and family, trying all the fun new restaurants in the valley, coloring and crafts, she would put anything on hold to help and care for any of her loved ones and took joy in doing so, and our annual family tequila shots to start off the Holidays. She was the light and joy of all her family and friends lives. Leigh Nicole McDermott is survived by her Father and Mother Michael and Dawn McDermott, her Brother Jeffery McDermott and Sister in Law and Jami McDermott, her Brother Christopher McDermott and Sister in law Jennifer Galston- McDermott, her Brother Kurt McDermott and Sister Amanda Drowns, and Brother in law Brandon Drowns, her Grandparents Joan Moskowite, and Harold & Bea Moskowite, and a large amount of aunts, uncles, cousins and nieces, R.C. Hernandez and Lisa Knutsen beloved friend and companions for many years, and an uncountable amount of loving friends who all love and cherish her. She will be missed by many and loved by all. Visitation will take place at Claffey and Rota Funeral Home on Friday, August 29, 2014 from 1-7pm. A Funeral Service will be held at Claffey and Rota on Saturday, August 30 at 12pm.

The family of Leigh Nicole McDermott created this Life Tributes page to make it easy to share your memories.

Leigh Nicole McDermott unexpectedly passed away from a sudden...

Send flowers to the McDermott family.