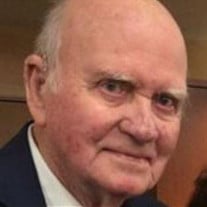 Kenneth Wayne Logan Sr., of Napa, passed away on May 30, 2019 at the UC Davis Medical Center in Sacramento due to complications from a heart procedure. Born in Carthage, IN on August 1, 1939, he was the son of William and Martha (Butler) Logan. After enlisting in the Air Force, he was stationed at Travis Air Force Base when he met his future wife, Elisa (Alice) Perez, of St. Helena. They married on December 18, 1958. They enjoyed over 60 years together living in Napa. After leaving the Air Force, he worked at various occupations, and retired while working for the Napa Valley Unified School District. In 1971 he dedicated his life to Jehovah God and was baptized as one of Jehovah’s Witnesses. He served as an Elder and full-time minister in the Redwood Congregation for many years. He had the privilege of visiting patients at the Queen of the Valley Hospital, the Veterans Home, and local nursing homes, bringing spiritual comfort to them. While serving Jehovah God, Ken and Elisa raised a family and have enjoyed spending time with their grandchildren and great-grandchildren. He liked to travel and took trips to Canada, Ireland, Italy, Malta, China, Hawaii, Mexico and Costa Rica, as well as many trips to Indiana to visit family. He always had a giving nature and helped many people. He volunteered and helped with building and educational projects—wherever there was a need. He is survived by his wife, Elisa, children, Kenneth Logan Jr. (Maria), Martha Piccolo (Joseph), Jessica Lopez (Frank), Naomi Nova (Oscar), as well as eight grandchildren and eight great-grandchildren; three sisters, Shelby Carpenter, Olive Forsythe, and Ilene Dyer, along with many nieces and nephews. He was predeceased by two sisters, Ona DeBoard and Melba Parsons, and his brother, Howard Logan. Ken was a real “people person”. He loved to stay in touch using his cell phone and those calls will be missed. A Memorial service will be held on June 22nd at 1:00pm at the Kingdom Hall of Jehovah’s Witnesses, 1976 Wise Drive, Napa, CA.

Kenneth Wayne Logan Sr., of Napa, passed away on May 30, 2019 at the UC Davis Medical Center in Sacramento due to complications from a heart procedure. Born in Carthage, IN on August 1, 1939, he was the son of William and Martha (Butler) Logan.... View Obituary & Service Information

The family of Kenneth Wayne Logan Sr. created this Life Tributes page to make it easy to share your memories.

Send flowers to the Logan family.