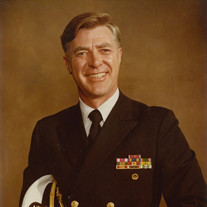 Joseph C. Lewis, Captain, USN, Ret. 1932-2017 Joseph C. Lewis, a long-time resident of Napa, California passed away peacefully on December 8, 2017 at his beloved Queen of the Valley Hospital after a short battle with cancer. Joe was born in Brooklyn, New York on March 4, 1932. He graduated from State University of New York, receiving his Bachelor of Science degree. Following college, he entered United States Navy recruit training at Bainbridge Island, Maryland and then attended the Naval Officer Candidate School at Newport, Rhode Island and received his commission in March 1955. Joe had a long and very successful career as a Naval officer during his 32 years, including challenging assignments in Guantanamo Bay, Cuba; Newport, Rhode Island; and Karamursel, Turkey. Following his assignment in Turkey, he studied Arabic at U.S. Army Language School, Monterey, CA and later worked as a foreign language analyst at Naval Security Group Activity, Fort Meade, Maryland. Other assignments took him to Nicosia, Cyprus; Ottowa, Canada; the Naval Communications Station, Guam; Da Nang, Vietnam; and to Skaggs Island, California where he was promoted to the rank of Captain. He also served four tours in Washington D.C. in various capacities, and was subsequently assigned to London where he served in a number of positions, including Director, Naval Security Group Europe, after which he retired in 1986. Following his retirement, he returned to California and began a new career in winery tasting rooms that included Hans Kornell Champagne Cellar and Deerpark Winery. He also served as General Manager at Balzac Communications, was active in local theatre, and performed volunteer work for the Napa Valley Symphony. Never one to sit still for long, Joe found his way to the Queen of the Valley Hospital, where he remained a volunteer for 16 years until his illness. Joe is survived by his beloved wife of 57 years, Carolynn, two daughters, Kimberly and Kathleen of Santa Barbara, CA, as well as 2 grandchildren, Christopher and Amber, 2 great-grandchildren, Liam and Vivienne, and his sister Maureen Alhouse of Colorado Springs, CO. A private family service will be held at a later date, followed by burial at sea. Joe’s family would especially like to thank the doctors, nurses, and other staff at Queen of the Valley Hospital and Hospice by the Bay for the exceptional care and support given to Joe and his family during this difficult time. Donations can be made in Joe’s name to Queen of the Valley Foundation (www.queensfoundation.org or (707) 257-4044) and Hospice by the Bay (www.hospicebythebay.com or (707) 935-7504).

Joseph C. Lewis, Captain, USN, Ret. 1932-2017 Joseph C. Lewis, a long-time resident of Napa, California passed away peacefully on December 8, 2017 at his beloved Queen of the Valley Hospital after a short battle with cancer. Joe was born in... View Obituary & Service Information

The family of Joseph C. Lewis created this Life Tributes page to make it easy to share your memories.

Send flowers to the Lewis family.