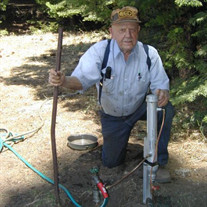 1915-2014 Joseph Imboden, a lifelong native of Napa, passed away on May 13, 2014. He was 99. Joe was born on May 12, 1915, to Swiss-Italian immigrants, Joseph and Basilia Imboden. Joe was the youngest of 11 children. On June 18, 1938, Joe married Dorothy Keller and they had three children: Richard, Bernice, and Dennis. Joe worked at Mare Island during World War II, and in 1946, started a very successful well pump business, Imboden Pump. He retired in 1980 and sold the business. Joe was a longtime member of the Native Sons of the Golden West Napa Parlor #62 and received his 50-year pin in 2010. He was also a member of the Loyal Order of the Moose. Joe is survived by his children, Bernice and husband Bob Quigley of Gooding, Idaho, and Dennis and wife Lea Ann Imboden of Sonoma; six grandchildren and six great-grandchildren; along with nieces, nephews, and cousins. He was preceded in death by his wife, Dorothy, in 1994 from Alzheimer’s; his son, Richard; his parents; and seven brothers and three sisters. Funeral services will be held at Claffey & Rota Funeral Home on May 20, 2014, at 2 p.m. with internment to follow at Tulocay Cemetery. Donations may be made in Joe’s name to the Humane Society of Napa County (NapaHumane.org), PO Box 695, Napa, CA 94559; Alzheimer's Association (Alz.org) PO Box 96011, Washington, DC 20090-6011; or Hanna Boys Center (HannaCenter.org), PO Box 100, Sonoma, CA 95476.

The family of Joseph Imboden created this Life Tributes page to make it easy to share your memories.

Send flowers to the Imboden family.