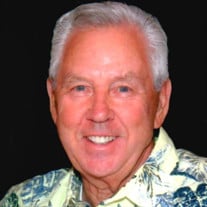 It breaks our hearts to announce that John Prince, aged 82, passed away peacefully on February 17, 2021 after a yearlong battle with Multiple Myeloma. He was surrounded by his loving family. John was born to Jesse and Katie Prince on March 6, 1938, in Atoka, Oklahoma and moved to California when he was just six weeks old. He grew up in Yountville and developed many strong childhood friendships which lasted for decades. John graduated from Napa High school in 1956 where he met his lifelong sweetheart, Louise Scaruffi. After graduation, John served in the U.S. Army and was stationed in Korea until 1958. After his return to the states, John and Louise were married on June 14, 1959 and established their home in Napa. In 1959, John began working for PG&E. He stayed with the company for 17 years. He and Louise met lifelong friends there and also went on to have their three wonderful children during that time. In 1978, with the support of his wife, he took a risk and followed his true passion by becoming a Realtor. He enjoyed his real estate career so much that he never fully retired. He used to say that his favorite hobby in life was real estate. Again, John developed many close colleagues, clients, and friends in the industry. John loved to travel. He especially loved driving and had many fun RV road trips around the USA and Canada with his family and friends. He enjoyed several cruises around the world with good neighbors and family. He took his wife, kids, and grandchildren on amazing vacations every chance he got just to enjoy seeing everybody together and happy. John was baptized and attended St. Apollinaris Church. He was an involved, lifelong member for over 40 years and made many dear friends there over the decades. John and Louise also enjoyed many fun years in the bocce ball league together. John was known for occasionally surprising his teammates with some amazingly precise ball tosses. He was also an active member of SIR and enjoyed gathering with local friends at the meetings and holiday events. John loved people. He especially loved talking with them and cracking jokes. He had endless stories to tell. Nobody was ever a stranger. His easygoing and humble nature made everyone feel welcome. He loved helping others and was the type of person who would drop everything to be there. He was both a caring neighbor and a loyal friend. Above all this, however, was his endless and unconditional love of his beloved wife and kids. He loved and encouraged each of them equally and generously beyond measure. He lived his life for them, it seemed, and out of all his incredible achievements, John would say his greatest treasure was the love of God and family. Thank you, John, for touching so many hearts. We love you. You will be deeply missed. John was predeceased by his parents, Jesse and Katie Prince. He is survived by his wife Louise, his sons Gary (Valerie) and Steve (Kim), daughter Julie McClenahan (Bob), grandchildren Dena, Alicia, Ryan, Jake and Tyler, beloved brothers Newton Joe (Carolyn) and Larry (Edith), and many nieces, nephews, and cousins. Donations can be made in John's memory to the "Cancer Wellness Program" at Queen of the Valley Hospital (queensfoundation.org/Donations.aspx), or to the St. Apollinaris Church "Repair & Maintenance" fund (stapollinarisparish.churchgiving.com). Due to COVID-19, the family will be holding a private graveside service.

It breaks our hearts to announce that John Prince, aged 82, passed away peacefully on February 17, 2021 after a yearlong battle with Multiple Myeloma. He was surrounded by his loving family. John was born to Jesse and Katie Prince on March... View Obituary & Service Information

The family of John Prince created this Life Tributes page to make it easy to share your memories.

It breaks our hearts to announce that John Prince, aged 82, passed...

Send flowers to the Prince family.