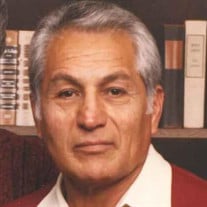 John C. Granado, 98, of Napa died peacefully February 12, 2017 at home surrounded by family. Our father went to be with God, his folks, Nicolas and Nicanora, his son, Narciso, ten of his siblings, family and friends. He leaves behind his wife of seventy years, Tonita, two sisters, five children, John, Nick, Annette, Joel, and David, a grandson, Jon-Jon, and a son-in-law, Lon. He was many things: son, brother, husband, father, friend, mentor, soldier, and patriot. He taught us to be strong, work hard, to be respectful but most importantly he showed us to love unconditionally. He spent his early life serving his country. Joining the US Army in March of 1941. Volunteered for the Airborne. Served in South Africa and Italy during World War II as a member of the 504th parachute Infantry Regiment, H Company assigned to the 82nd Airborne. He received the Purple Heart and Distinguished Service Cross for defending his company’s flank, allowing his company to withdraw to a safer position, resulting in his capture. He was reported as a prisoner of war. He survived and returned home, working 34 years at Mare Island Shipyard as a pipefitter in shop 56 building submarines for the US navy. After retirement he spent summers travelling the United States, Mexico, and Canada in a travel trailer with his family. He turned his love of woodworking into a second career, making custom desks, cabinets, and shelves for various professional offices and homes around Napa. He was the best. We shall miss and think fondly of him every day. A memorial service and celebration of life will be at 10:00am Tuesday February 28th at St. Joan of Arc, 6404 Washington St., Yountville, CA. In lieu of flowers, donations may be made to St. Jude’s Children’s Hospital. Burial with military honors at Sacramento Valley National Cemetery in the care of Claffey and Rota Funeral Home.

John C. Granado, 98, of Napa died peacefully February 12, 2017 at home surrounded by family. Our father went to be with God, his folks, Nicolas and Nicanora, his son, Narciso, ten of his siblings, family and friends. He leaves behind his wife... View Obituary & Service Information

The family of John C. Granado created this Life Tributes page to make it easy to share your memories.

Send flowers to the Granado family.