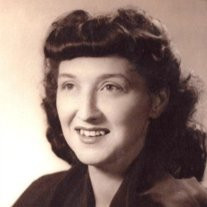 Jean Cox, 87, of Napa, passed away on April 2, 2013, at her home, surrounded by the family that adored and loved her so. Born Eva Mae Ronconi, to Natalie Ronconi and Tillie Granatilli-Ronconi on March 29, 1926, in Napa, she was preceded by her husband, the late Lloyd Cox. She was a woman full of energy, a woman who did it all. She worked, raised five kids, was the best cook ever, and also had a green thumb in the garden, especially with her roses. In the 1960s, Jean was the first woman to join a men’s scratch bowling league. Jean also loved and enjoyed playing tennis. She was an accomplished musician, primarily playing the piano — and, oh, what a singer and dancer she was. Jean’s Italian heritage was rich in history, dating back to the 1800s in the Napa Valley. Her grandmother, Eva Granatilli, a surgical nurse, delivered over a thousand babies at her home at 2031 Main St. Her grandfather, Frank Granatilli, owned and operated the White Front Inn in downtown Napa. Her uncle, Knox Granatilli, owned the Soda Works on Main Street and her aunt, Helen Granatilli-Hensley, owned the Old Adobe in the 1930s. And, of course, being in wine country, her uncle, Felix Borreo, owned the Bay View Vineyard in Napa Soda Springs. Later on in years, her 14 grandchildren, six great-grandchildren, and one great-great-grandchild kept Jean busy and on her toes. It was a favorite time in her life, being around all her grandkids. She is survived by her son, Don Santos and wife Jasmine; daughter, Donna Santos Walker and husband Jimmy; son, Dallan Santos and wife Andrea (Jehovah’s Witnesses); son, Drew Cox and wife Jeannie; and daughter, Debbie Cox Pridmore and husband Darryl. She did not want a funeral, and has been buried in her family plot at Tulocay Cemetery. Contributions may be made to the American Cancer Society.

Jean Cox, 87, of Napa, passed away on April 2, 2013, at her home, surrounded by the family that adored and loved her so. Born Eva Mae Ronconi, to Natalie Ronconi and Tillie Granatilli-Ronconi on March 29, 1926, in Napa, she was preceded by... View Obituary & Service Information

The family of Jean Rinconi Cox created this Life Tributes page to make it easy to share your memories.

Send flowers to the Cox family.