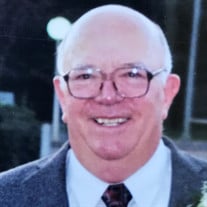 James E. Fidler, born February 3, 1935, died peacefully at Queen of the Valley hospital surrounded by his wife, sisters, children and grandchildren on Thursday, August 24, 2017. He was born in Napa to Orvle and Anne Fidler. He met Maxine Rentz in Salem Oregon, they were married on October 24, 1953, and they settled in Napa. Jim worked at the Cal-Nap and Sawyer Tanneries, Basalt Block Plant, and Central Valley Builders Supply. He was a member of Knights of Columbus and St. Apollinaris Church, and was President of the Silverado Archery Club and the 5-Star Squares square dance club. He enjoyed hunting, fishing and card playing, and loved camping with family and friends and barbequing at family gatherings. He is survived by his wife of nearly 65 years, Maxine; his eight children, James, Larry (Cathy), Greg (Jeanie), Sandra Harvey (Floyd), Paul (Trudy), Mark (Kathleen), Carol Lalonde (Greg), and Steven (Megan); 21 grandchildren, 10 great grandchildren, and many nieces and nephews. He is also survived by his sisters, Grace, Nanci and Fran. He was preceded in death by their first daughter, Diane; his parents, Orvle and Anne Fidler; and his brothers, Palmer and Bob. Our loving and beloved husband, brother, father, grandfather, uncle, and friend will be forever in our hearts. He was a shining example of how an honest, kind, strong, and responsible man lives his life. A Rosary will be held on Tuesday night, August 29, at 7:00pm at St. Apollinaris Catholic Church, 3700 Lassen St. in Napa. A Funeral Mass will be held on Wednesday, August 30, at 11:00am, also at the church, and will be followed by a reception in the parish hall. Memorial donations may be made to Birthright of Napa.

James E. Fidler, born February 3, 1935, died peacefully at Queen of the Valley hospital surrounded by his wife, sisters, children and grandchildren on Thursday, August 24, 2017. He was born in Napa to Orvle and Anne Fidler. He met Maxine Rentz... View Obituary & Service Information

The family of James E. Fidler created this Life Tributes page to make it easy to share your memories.

Send flowers to the Fidler family.