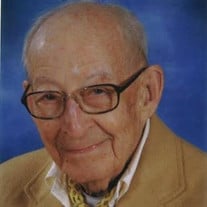 James John Ferrigan, age 97, passed away at his daughter’s home in Napa, CA, surrounded by his family on January 17, 2016. He was born on November 29, 1918 in McKeesport, PA, to James John Ferrigan Sr. and Nellie Malloy Cadden Ferrigan. James was an Altar Boy and student at St. Peter’s Roman Catholic Parish & School, across the street from his McKeesport home, through elementary and high school. He went on to graduate in 1939 from Duquesne University, Pittsburgh, PA, with a Bachelor’s Degree in History, with plans to attend law school. After university, while he saved for law school, he took employment with The Bethlehem Steel Corporation in Bethlehem, PA. James also took night courses from the University of Pennsylvania Extension in conjunction with his job in the Metallurgical Department at the Lehigh/Saucon Plant of Bethlehem Steel. Like so many young men of his generation WWII changed his plans. Although he was draft deferred because of an essential war related job, in 1944 he volunteered for service in the U.S. Navy. He attended Officers Candidate School at Princeton University, Princeton, NJ, after which he was assigned to study Mandarin Chinese at the U.S. Naval Oriental Language Training School in Boulder, CO. It was during his tenure in Boulder that he met and courted Marian (Mern) Juanita Saval, the youngest daughter of Joe and Jesusa Saval of Battle Mountain, Nevada. After language school Lt. (jg) Ferrigan worked in Naval Intelligence at the U.S. Naval Communications Annex in Washington D.C. Upon separation from the U.S. Navy in 1947, Jim returned to the Bethlehem Steel Company moving from the Metallurgical Department to the Purchasing Department. Capitalizing on his Chinese language skills, Bethlehem Steel sent him to Guam, the Marshall Islands, the Marianas Islands, Micronesia and China to buy surplus and scrap war material. He returned to the States in late 1948 and wed his beloved Mern on January 26, 1949 at St. John Bosco Catholic Church in Battle Mountain, NV. They honeymooned in Europe for six months while Jim continued to purchase scrap war material in Allied occupied Germany. As Jim rose through the ranks at Bethlehem Steel’s Purchasing Department he worked in each Division buying everything from paper clips to locomotives; and negotiating for delivery of bulk raw materials and the occupation of finished office buildings. Together he and Mern raised five children. Their time was divided between home and school in Bethlehem, PA and summers spent on ranch chores, raising hay, working sheep and cattle on Marian’s family ranch, The Joe Saval Estate. The ranch straddled Humboldt, Lander, Pershing and Churchill counties in north-central Nevada. In 1966 Jim was transferred to San Francisco, CA to become the Purchasing Agent for Bethlehem Steel on the West Coast, where he resided in Hillsborough, CA. He returned to Bethlehem, PA in 1970 and before retirement in 1982 he rose to become the Special Assistant to the CEO for Purchasing with an emphasis on scrap, recycling and government relations. He worked for Bethlehem Steel for 42 years. After retirement Jim and Mern spent their time traveling between their Bethlehem home and the family ranch, and watching their grandchildren grow to adulthood. Jim was a member of the Elks Club; the Heights Athletic Association of Bethlehem, PA; the Sun Inn Preservation Association; the Saucon Valley Country Club, Bethlehem, PA; the Olympic Club of San Francisco, CA and served as a volunteer Scouter with the Boy Scouts of America, Bethlehem Area Council. Because of their bi-coastal connections Jim and Mern counted themselves active members of two Roman Catholic parishes: St. Anne Catholic Church in PA and St. John Bosco Catholic Church in Nevada. In his later years Jim attended daily Mass, even when traveling; when in Reno, Nevada, at Our Lady of the Snows Catholic Church and when in Napa, CA, at St Apollinaris Catholic Church. Jim liked crossword puzzles, good books, shaggy-dog stories, old movies, parties, the out-of-doors and people; but he loved The Sunday New York Times Crossword; The Mouse That Roared, Limericks, The Sound of Music, Manhattan cocktails, Pennsylvania and Nevada, and eclectic gatherings of friends and family. James was predeceased by Mern, his wife of 52 years, in 2001, his sister Norinne Ferrigan Ruehl in 2007, a grandson Timothy James Carter in 1995, an infant son, Joseph Saval Ferrigan in 1963 and a half-sister Margarite Dolton Ferrigan in 1917. He is survived by his five children and their spouses; son, James J. Ferrigan III and Eniko Lillian Varga, and his daughters, Ann Ferrigan Healy and Dr. Frank Healy, Noreen Ferrigan Tartaglia and Harold M. Tartaglia, Kathleen Ferrigan Annis and Jerry Annis and Lisa Ferrigan Carter and Tim Carter; 12 grandchildren; 15 great grandchildren and many nieces and nephews and a large family of friends on both Coasts. A viewing and Recitation of the Rosary will be held on January 25 at St. John Bosco Catholic Church, Battle Mountain, Nevada at 5:00 PM. A Mass of the Resurrection will be celebrated on January 26, 2016 at 2:00 PM at St. John Bosco Catholic Church, 384 S Reese St, Battle Mountain, NV. Burial will follow at Battle Mountain Cemetery. Celebration of Life memorial services are planned for St. Anne Roman Catholic Church, 450 East Washington Avenue, Bethlehem, PA for East Coast family and friends and at Our Lady of the Snows Roman Catholic Church, 1138 Wright St, Reno, NV, for West Coast family and friends, both at times and dates to be announced. Mass intentions cards may be posted to Ferrigan Family, PO Box 296, Battle Mountain, Nevada, 89820. In lieu of flowers, the family requests donations be made to any of the above parishes in Jim’s memory.

James John Ferrigan, age 97, passed away at his daughter&#8217;s home in Napa, CA, surrounded by his family on January 17, 2016. He was born on November 29, 1918 in McKeesport, PA, to James John Ferrigan Sr. and Nellie Malloy Cadden Ferrigan.... View Obituary & Service Information

The family of James John Ferrigan created this Life Tributes page to make it easy to share your memories.

James John Ferrigan, age 97, passed away at his daughter’s home...

Send flowers to the Ferrigan family.