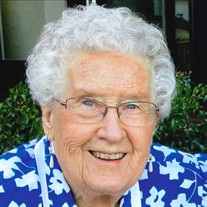 On June 19, 2021, Helen Ruygt passed away peacefully in her sleep at the age of 93. As the matriarch of the Ruygt & Van Winden Families she was a kind and caring soul, loved by many family and friends locally and in her homeland of Holland.... View Obituary & Service Information

The family of Helen Adriana Ruygt created this Life Tributes page to make it easy to share your memories.

Send flowers to the Ruygt family.