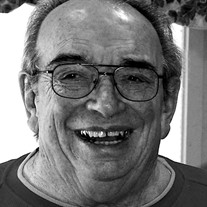 Harry Miroglio, of Napa, beloved husband, father, grandfather, great grandfather and friend, passed away peacefully at Mercy Hospital of Folsom, on February 7th, 2018, following a brief illness. Surrounded by his family at the time of his passing, he was 86. Harry was born on September 22, 1931 in St. Helena, to Enrico and Maria Miroglio, who had emigrated there from northern Italy. His birth was viewed as a blessed surprise by his parents, who believed his mother was past childbearing age. In celebration of his birth, his father Enrico named his White Lane winery the “Little Harry Winery”. Harry attended St. Helena High School, where he was elected Student Body president, Homecoming King, and most importantly, met the love of his life, Peggy (Cooper) Miroglio. They were married in 1952, celebrating their 63rd Wedding Anniversary before she passed away in 2016. After High School, Harry proudly served his country in the Army during the Korean War with the 55th Battalion. After returning from Korea, Harry and Peggy had 4 children: Lynn, Bruce, Joel, and David, raising their family here in Napa. Harry loved people, and was a successful insurance salesman for many years. He later worked for Central Valley Hardware, where he is well known by Napa Valley contractors for his many jokes and ready smile for them as he worked the gate at Central Valley’s Napa location. Harry’s greatest love and joy was reserved for his wife and family. He was a constant fixture at all his children’s activities at St. Apollinaris Catholic School and Justin-Siena High School, barely containing his pride in their every success. This pride extended to his growing next generation family, now counting 17 grand and great grandchildren, who collectively mourn the loss of their beloved Papa Yo Yo. He will be greatly missed. Harry is survived by his 4 children, daughters-in-law Mary, Naomi, and Suzi, his 12 grandchildren - Anthony, Andrew, Cara, Celia, Dante, Taylor, Ben, Jenna, Paige, Gabriella, Dominic, and Elena, and his 5 great grandchildren, Ava, Madeleine, Ryan, Luca, and Audrey. A private family memorial service Mass will be held in his honor. A Rosary Vigil will be held February 15 at 7 pm at St. Helena Catholic Church. In lieu of flowers, the family asks that Memorial donations be made in Harry’s name to St. Apollinaris Catholic Church (707-257-2555).

Harry Miroglio, of Napa, beloved husband, father, grandfather, great grandfather and friend, passed away peacefully at Mercy Hospital of Folsom, on February 7th, 2018, following a brief illness. Surrounded by his family at the time of his passing,... View Obituary & Service Information

The family of Harry Miroglio created this Life Tributes page to make it easy to share your memories.

Send flowers to the Miroglio family.