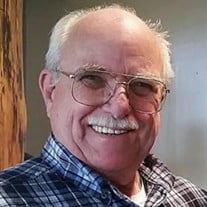 Gerhard (Gary) Martin Valentinsen of Napa passed peacefully in the early morning on Tuesday, December 14, 2021, after losing his battle with cancer. Gary, born in Atlantic City, New Jersey, November 4, 1944, was the son of Gerhard and Ruth Valentinsen of Ventnor, New Jersey. He was the second eldest of five children, Ruth Advena of Ventnor, New Jersey, Barbara Mazzeo (D) of Galloway, New Jersey, William Valentinsen of Aston, Pennsylvania, and Robert Valentinsen of Egg Harbor, New Jersey. He was raised in Ventnor, New Jersey and a graduate of Atlantic City High School Class of 1962. Gary enlisted in the U.S. Navy in September 1962; after completing Electronic schooling at Treasure Island was assigned to U.S. Naval Air Station in Lemoore, California. Gary was married to Janette Rae Stratton on September 12, 1965 at St John the Baptist Catholic Church in Napa. Gary and Janette had two children Timothy Martin Valentinsen and Mary Catherine Valentinsen. In May of 2008, Janette passed after losing her battle with cancer. Gary had a successful career as a Customer Engineer with IBM from 1966-2006. During his career he traveled throughout the bay area repairing and maintaining equipment. He enjoyed meeting customers of all walks of life and seeing northern California, most days traveling at least 100 miles per day. A lifetime Roman Catholic, Gary was a devoted member of St. Apollinaris Catholic Church in Napa. He volunteered as an Usher and assisted with the security of the Sunday collections for the church. Gary loved anything trains. He had a model railroad layout in his home and spent years traveling to and visiting train stations and museums. He was a longtime member and past president of the Napa Valley Model Railroad Historical Society. He was a docent with the California State Railroad Museum in Sacramento, California, dedicating 2,000 hours each year to leading tours and working in the upholstery shop. Gary was a loyal friend to many, his kindness, caring and compassion along with his great sense of humor made him a true joy to be around. He was strong, courageous, dependable and selfless. He will be greatly missed by all. Gary is survived by his children, Timothy Valentinsen and his wife Sara Valentinsen of Longmont, Colorado, and Mary Valentinsen of Vallejo. Gary was a proud grandfather of three: Ryan Valentinsen – son of Tim and Sara; Michael and Robert Rich – sons of Mary; and great grandfather to Thoren and Finley – sons of Michael and Ashley Rich. Visitation will be held pm at Claffey and Rota Funeral Home in Napa on Monday, December 20, 2021, from 3:00 – 4:00pm, followed by the Rosary prayer service at 4:00 pm. The funeral Mass will be held Tuesday, December 21, 2021, at 11:00am at St Apollinaris Catholic Church in Napa. In lieu of flowers or gifts, the family would like donations be made to the California State Museum Foundation: https://interland3.donorperfect.net/weblink/weblink.aspx?name=E352471&id=7

Gerhard (Gary) Martin Valentinsen of Napa passed peacefully in the early morning on Tuesday, December 14, 2021, after losing his battle with cancer. Gary, born in Atlantic City, New Jersey, November 4, 1944, was the son of Gerhard and Ruth... View Obituary & Service Information

The family of Gerhard Martin Valentinsen created this Life Tributes page to make it easy to share your memories.

Send flowers to the Valentinsen family.