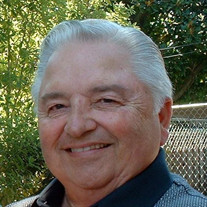 Gerald Leon Schiefferly 1938-2014 Gerald Leon Schiefferly was born on Aug. 8, 1938, to Leon and Virginia Schiefferly, in Modesto, California, as a sixth-generation Californian. Jerry passed on Nov. 18, 2014, surrounded by his loving family. Jerry was raised in Sausalito, California, and his family moved to Stockton, California, where he graduated from high school in Linden, lettering in football. Jerry graduated from Stockton College. Jerry met the love of his life, Janet Freshour, who lived down the country lane and they married on Sept. 3, 1961. Shortly thereafter Jerry was drafted into the Army, and moved to Washington, D.C., with his new bride, serving in an engineering unit but he also enjoyed participating on the Army pistol team. Jerry was honorably discharged from the Army in October of 1963 and he returned home to California and bought a grocery store in Sutter Creek, California. In February of 1964, Jerry and Jan had their first child, Lisa Renee Schiefferly (Paul). Jerry sold the store and took a position at Mare Island Naval Shipyard where he worked for 28 years in Ocean Engineering and Mechanical Design. He moved his family to Napa in 1968 and the following year, Jerry and Jan’s son, Gerald Matthew Schiefferly, was born. Jerry loved his country and was proud to serve a career working as a civilian for the Navy that protected his country in the nuclear submarine field. Jerry loved his family and if it involved camping, fishing and hunting, all the better. He was an avid fisherman and excellent marksman. He loved to talk about his most recent “great catch” and loved to hear other fishing tales. A lifelong hunter, he particularly enjoyed deer hunting with his friends and family. Jerry and Jan loved to bowl and spent many evenings enjoying times with friends at Napa and Bel Air bowl, never hitting the perfect 300, but came close with a 289. Jerry loved sports and coached for both his daughter’s softball team and his son’s football and baseball teams. In recent years, he loved seeing all of his grandchildren participate in sports, watching grandchildren’s baseball, soccer, volleyball and basketball games. Jerry always arrived wearing his life long Giants cap and once teased his new son-in-law that he couldn’t show up for Sunday dinner wearing a Dodger cap. Jerry was a reluctant traveler who would arrive home to say he had the time of his life, traveling extensively in the U.S. and a few trips to Europe. Jerry was very active in SIRS, serving as “The Big SIR” and was proud to be a lifelong honorary member of SIRS Branch 105. Jerry was a quiet, patient man of few words, but his advice was well-respected. He was kind and never had a sour or harsh word. He loved to tinker and was a man who could fix anything. Jerry quietly received numerous achievement awards from the Dept of the Navy for his valued contribution to our country’s defense. When his grandchildren needed some guidance they always went to their “Poppy”, as he listened more than he spoke and always gave unconditional support. He bragged often of his many grandchildren and said he had the three most beautiful granddaughters a man could want. Jerry is survived by wife of 53 years, Janet; his sister, Carol Whitehouse of Tennessee, and brother, Calvin Schiefferly of Elk Grove; His daughter, Lisa and husband Marvin Paul, of Napa; his son, Matt Schiefferly and fiancé Shannon O’Shaughnessy of Napa; his grandchildren, Curtis Paul and his wife Renee, Ryan Paul, Madison Paul, Jacqueline Paul, Natalie Schiefferly and Owen Schiefferly. A celebration of life will occur at Tulocay Chapel in Napa, Tuesday, Nov. 25, at 11 a.m., under the direction of the Claffey and Rota Funeral Home. Burial will follow with Military Honors. A reception will follow at 9 Huntington Court, after the burial.

The family of Gerald Leon Scheifferly created this Life Tributes page to make it easy to share your memories.

Send flowers to the Scheirfferly family.