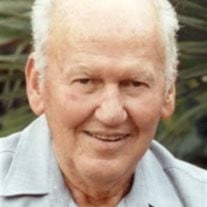 With sad hearts, we announce the death of our beloved father, grandfather, and great-grandfather, Frederick Clyde Tholcke. He was born in Porterville, CA on June 6, 1924 to William Francis Tholcke and Anna T. Heinzen and entered eternal life on January 22, 2014. Fred graduated from Porterville High School in 1942 and attended the University of Santa Clara until he joined the Army Air Corp during World War II. He served as a First Lieutenant and was a B24 “Liberator” co-pilot in missions flown over Italy; he was honorably discharged in 1945. He married Patricia Rose Mego on May 1, 1953. Together, they raised their family in Napa and enjoyed 53 years of marriage. Fred worked as an engineer for Pacific Telephone & Telegraph, one of the “telephone pioneers,” for 39 years before retiring on June 6, 1985. Fred and Pat enjoyed camping with their children at many northern California sites including Hat Creek and Eagle Lake. He was a loyal 49ers and Giants fan who loved to take walks in the neighborhood and tend to his yard. Fred is survived by his four loving children, Dianne (Ron) Weichel of Grass Valley, Richard (Jeannette) and Gary of Napa, and Stephen (Cheryl) of Sacramento; four grandchildren, Jeremy, LeAnn and Chris (American Canyon), Sarah (Napa), and Nick (currently serving in the U.S. Army in Afghanistan); one great grandchild, William Christopher. Fred is also survived by many nieces and nephews. His loving wife, Pat, and his siblings, Evelyn (Bill) Acree, George (Grace), and Bill (Mary) all greeted him upon his arrival in heaven. The funeral Mass will be held on Friday, January 31 at 10 a.m. at St. John the Baptist Catholic Church. The vigil service will be held on Thursday, January 30 at 7 p.m. at the Claffey and Rota Funeral Home. The viewing will begin at noon on January 30. Private interment will be at Tulocay Cemetery at a later date. In lieu of flowers, please send a donation in his memory to St. John the Baptist Catholic School Foundation, 983 Napa Street, Napa 94559 (http://school.stjohnscatholic.org/info_fundraising.php).

With sad hearts, we announce the death of our beloved father, grandfather, and great-grandfather, Frederick Clyde Tholcke. He was born in Porterville, CA on June 6, 1924 to William Francis Tholcke and Anna T. Heinzen and entered eternal life... View Obituary & Service Information

The family of Frederick Clyde Tholcke created this Life Tributes page to make it easy to share your memories.

With sad hearts, we announce the death of our beloved father,...

Send flowers to the Tholcke family.