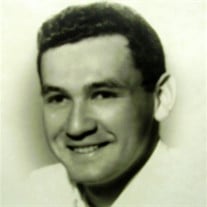 Early in the evening, on July 25th, 2017, Frederick Francis Avilez died peacefully at the Yountville Veterans Home at age 87. Fred was born in Oakland on June 8th, 1930 and lived in the Bay Area his entire life. As a boy, he savored the ice cream, milkshakes and sundaes served by "old Mr. Fenton" at Fenton's Ice Cream Parlor. He witnessed the rise of the Bay Bridge and the Golden Gate Bridge. One special day, his father took him to Oakland airport, picked him up on his shoulders, pointed as a plane took off and said: "Look, Freddie, there goes Amelia Earhart!" Fred obtained his bachelor's degree at University of California, Berkeley. He joined the rowing crew, and formed friendships that would last a lifetime. Fred also served his country as a combat veteran as part of an artillery unit in Korea. After his honorable discharge, he returned to Cal and helped coach the rowing crew. Throughout his life, Fred stayed active. He had a sharp sense of style, and loved reading, traveling and having good conversations with good friends. He shared endless anecdotes and stories, and his companions enjoyed his quick wit, good humor and always-optimistic nature. Over his life he took many road trips up and down the Pacific Coast Highway, from the old growth redwoods of Humboldt county to the galleries and boutiques of Carmel. Fred celebrated his 50th birthday by running his first marathon (in Hawaii) and would run others, including a high elevation marathon around Crater Lake. At his retirement, Fred embarked on a rambling road trip, a self-directed tour of America that passed through all 48 contiguous states. Fred lived his last three years at the Yountville Veterans Home, where he flourished. He quickly became a fixture in the library and a familiar figure with a friendly word to all as he walked the grounds, admiring the magnificent old trees. He made new friends, and with them explored what Napa, St. Helena and Calistoga had to offer. On August 10th, 2017 Fred's ashes were interred with military honors at the cemetery at the Yountville Veterans Home. Fred was preceded in death by his father, Daniel Albert Avilez; his mother, Helen Tuttle; his brother, Robert Tuttle; and his adopted daughter, Bonnie Anita Carroll. Fred is survived by his daughter Nancy Helen Avilez, and his son Kenneth Douglas Avilez.

Early in the evening, on July 25th, 2017, Frederick Francis Avilez died peacefully at the Yountville Veterans Home at age 87. Fred was born in Oakland on June 8th, 1930 and lived in the Bay Area his entire life. As a boy, he savored the ice... View Obituary & Service Information

The family of Frederick Francis Avilez created this Life Tributes page to make it easy to share your memories.

Send flowers to the Avilez family.