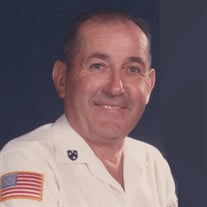 Our Dad, Frank Richard Markovich, gently passed away of natural causes on Monday morning October 29th, 2018. Born in Oakville in 1923, the youngest of five, and the only California-born child of Thomas and Veronica (Lesh) Markovich, Frank celebrated his 95th birthday in March of this year, driving himself from his home, where he had lived for sixty-seven years, to a family dinner in his honor. A first generation American of Croatian heritage, Frank was born on “the ranch” in Oakville, and he grew up caring for the chickens, pigs and cows, tending the vegetable garden, and helping his siblings with the thirty-two acres planted to vineyard that his father started in 1920 and operated until 1945. In Oakville, Frank attended primary school in the one-room schoolhouse at 1250 Oakville Grade Road (now the site of St Stephen's Episcopal Church) and he learned to swim at the Doak estate (now the Carmelite monastery). Frank told hair-raising stories of racing down the unpaved Oakville Grade road, having to tie a tree branch to his bike to slow it down, kicking up dust clouds so high that it could be seen from the valley floor. After eighth grade, Frank went on to Napa Union High School playing baseball, a sport he loved throughout his life. One day at lunch, while playing ping-pong in the gym, he met Lois Halloran, his future wife. Frank and Lois both graduated in the Napa Union High School class of 1942. On May 19, 1943, Frank was drafted into the United States Army. On September 25th, 1943, he recalled sailing under the Golden Gate Bridge, looking up and wondering if he would ever see it again. The troop transport brought him to Nouméa, New Caledonia in the South Pacific theater where he joined the 721st Ordnance Company of the Americal Division, attaining the rank of Sergeant Technician 4th Grade working as a small arms weapons mechanic. He wrote that his happiest time of his life was when Japan surrendered, and he could come home. He would see the Golden Gate Bridge once again. Frank’s wartime service was tremendously impactful and a source of pride throughout his life, as exemplified by his words: “I feel it was an honor to have served.” After returning to the family home in Oakville, Lois and Frank married at St. John’s Catholic Church on January 12, 1949 and subsequently celebrated the birth of two sons, Thomas and Gary. Frank worked for 36 years at Mare Island Naval Shipyard as an ordnance man and marine machinist. Frank’s love of the outdoors, as a fisherman and hunter, began in his childhood, and continued throughout his life. He loved any kind of fishing, and once had such success that he lost track of time and had to hike his way back miles to camp, at night without a flashlight. In his retirement he rarely slowed down and his family fondly called him the “Energizer Bunny.” He golfed with the SIRS whenever he could, and much of his time was spent in projects with others--rescuing steelhead trapped in streams during droughts, negotiating prices and transporting crab for feeds at the Native Sons, or patrolling, maintaining, repairing and caretaking the Chamberlain property in Dry Creek He was a beekeeper and he was proud of his honey, winning ribbons from his entries in the Napa Fair. Every year he planted a garden, growing tomatoes, corn, string beans, red onions, bounty which he readily shared with family and friends. One of Frank’s most meaningful memories was attending the dedication ceremony of the World War II Memorial in Washington D.C. Of the thousands of attendees, Frank was one of the few WWII vets who wore his uniform. He was touched by the many people who stopped him, thanked him for his service and asked to take their photos with him. In the last few months Frank’s mobility was limited but his spirits were bolstered by his well loved buddies who were faithful visitors. Frank’s family and friends will miss his generosity, his integrity, his sense of humor and his love more than words can express. He truly exemplified the most admirable qualities of those who have been a part of “The Greatest Generation.” The family is grateful for the care and support Frank received during his time at the Napa Valley Care Center, particularly from Derrick, Princess, Uday, Darlene, Carmel and Tess. Frank was predeceased by his wife Lois, his sisters, Mary, Rose and Catherine and his brother Thomas Jr. He is survived by his sons Tom (Elaine) and Gary (Kim), granddaughters Kandace and Camille, his nieces Rosalind and Francis, his nephew Don Krisha (Patti), grandnieces Caroline Pollard and Christine Crawford, his niece Sherry Munk, and his brother-in-law Harold Halloran. A Rosary service will we held at Claffey and Rota Funeral Home on Sunday, November 4th, at 4:00 PM. Visitation will begin at 3:00 PM. A funeral mass will be celebrated at St. Apollinaris on Monday, November 5th at 11:00 AM preceded by the presentation of the colors. A reception will follow in the St. Apollinaris Hall at the conclusion of the service. Interment will be at Tulocay Cemetery at 2:30 PM. In lieu of flowers, the family encourages you to make a donation in Frank’s name to the charity or cause of your choice.

Our Dad, Frank Richard Markovich, gently passed away of natural causes on Monday morning October 29th, 2018. Born in Oakville in 1923, the youngest of five, and the only California-born child of Thomas and Veronica (Lesh) Markovich, Frank celebrated... View Obituary & Service Information

The family of Frank Richard Markovich created this Life Tributes page to make it easy to share your memories.

Our Dad, Frank Richard Markovich, gently passed away of natural...

Send flowers to the Markovich family.