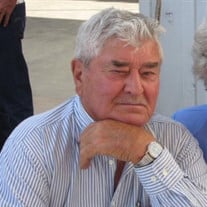 Frank John Borges, age 84, passed away on Saturday, October 28, 2017 at Queen of the Valley Hospital surrounded by his family. Frank was born on May 12, 1933 in Chiles Valley, the third of four children of Frank and Virginia (Souza) Borges. He attended Pope Valley School, St. Helena Junior High and St. Helena High School graduating in 1952. After graduating from high school, Frank worked first as an employee and later partner in Harold Smith & Son, Inc. construction company for over 40 years. He married his wife Barbara in 1956 and he served in the US Army from 1956 to 1958, stationed in Germany. He will be remembered as a self-made, generous man who loved his family, worked hard, helped his friends, and most importantly lived with a code of honor which brought him the respect of those who crossed his path. He enjoyed river and ocean fishing, hunting, sports, welding, wood working projects, and growing grapes, vegetables and fruits. Frank was a loving husband, father, grandfather, brother, uncle, cousin and friend. He is survived by his wife of 61 years Barbara, children Brenda Isaac (Mark), Laurie Sopwith (Jim), Frank Borges, Jr. (Sheri) and Janie Salinger (Tary); grandchildren Jessica Dooley (Gary) , Tenaya Larocco (Tony), Dana Bert (Patrick) , Daniel Isaac (Amanda), Jennifer Strunck, Erik Salinger, Christian Borges, Janelle Borges, Nicholas Sopwith and Ryan Sopwith; twelve great grand-children; sister Beverly Borges; sisters-in-law Norma Beltrami and Katherine George (Mick) and numerous nieces and nephews. He was preceded in death by his parents, sisters Virginia Chambers and Evelyn Souza and grandson Shane Travioli. A Mass of Christian Burial will be held Friday, November 10 at 11 a.m. at the St. Helena Catholic Church. In lieu of flowers, donations to a charity of your choice in his memory would be appreciated.

Frank John Borges, age 84, passed away on Saturday, October 28, 2017 at Queen of the Valley Hospital surrounded by his family. Frank was born on May 12, 1933 in Chiles Valley, the third of four children of Frank and Virginia (Souza) Borges.... View Obituary & Service Information

The family of Frank John Borges created this Life Tributes page to make it easy to share your memories.

Send flowers to the Borges family.