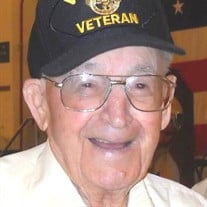 1918-2018 Francis “Jeep” Sanza, age 99, passed away peacefully at his Napa home in the early morning of January 30, 2018. Jeep was recognized throughout the nation as “Patton’s Driver” during WWII, and was also affectionately known in the Valley as “Napa’s Milkman.”. He was born to Nicholas and Lucia Sanzonetti in Forestville, Pennsylvania on October 25, 1918. His father died when he was five years old, leaving behind his mother and seven children. During the Great Depression, he had to leave school in the 10th grade to work and help support the family. After joining the U.S. Army, Jeep attended auto school in Fort Story, Virginia, where he became involved in the development of the first jeep capable of operating in deep water. He then demonstrated the jeep for Eisenhower and Roosevelt and earned the moniker, “Jeep”. He was subsequently assigned to an Army encampment in the Brown’s Valley area of Napa where he met Evelyn Kramer and married her prior to being shipped to Europe for the D-Day invasion. Based upon his knowledge of the Jeep, he was selected by General George Patton to be his driver. After the war, Jeep was discharged from the Army with the rank of Tech Five in November, 1945. He had a multitude of stories about the war and about the famous general he served. Oliver North published episodes about him within the “Patton” segment of the “War Stories” television show. Jeep was also asked to speak at many events for the Veterans National Convention. Upon his return to Napa, Jeep was first employed at the Mare Island Naval Shipyard ammunition depot and transitioned to manage an ALSCO Olympia Beer distributorship owned by Al Trombetta from 1959 through 1977. In 1977, he opened a long career with Clover-Stornetta Dairy, beginning with commercial and home delivery routes, and advancing to become the sales representative at the Napa Town & Country Fair . He grew to be known affectionately as “Napa’s Milkman”, delivering dairy products, refrigeration and logistics support to the Napa Town and Country Fair and other events throughout Napa Valley. He continued his long association with Clover-Stornetta and the Napa Fair through his 96th year, dispensing free Clover-Stornetta ice cream every year. He was a very active member of the Italian Catholic Federation serving as President for thirteen terms. He was a long-time member of the Sons of Italy. He was a coach for the Napa Girl’s Softball League throughout the 1950’s and coached the Jonesey’s team within the Napa Boy’s Fastpitch Softball League from 1973 through 1977. Jeep is survived by Evelyn Sanza; daughter, Lavon Sanza Fagan; daughter, Christine McCall and husband, Tim; son, Nick Sanza Sr. and wife Marcia; and son, Frank Sanza and wife, Pamela. He is also survived by eleven grandchildren and thirteen great-grandchildren. He was preceded in death by his parents; brothers Charlie, Steve, Pasqual and Joe; sisters Lena and Gladys; and his grandson, Anthony M. Sanza. A Rosary will be held 7:00 p.m., Sunday February 4th, at Claffey and Rota Funeral Home located at 1975 Main Street in Napa. A funeral mass will be conducted 10:00 a.m., Monday February 5th, at St John’s Catholic Church, located at 960 Caymus Street, Napa. Memorial donations may be directed to St. Jude’s Children’s Hospital, Jeep’s favorite charity. He loved helping children.

The family of Francis “Jeep” Sanza created this Life Tributes page to make it easy to share your memories.

Send flowers to the Sanza family.