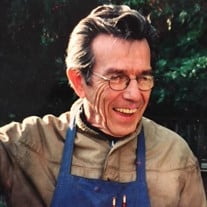 Francis Anthony Crotty passed from this life with his dear family nearby on Monday, Dec. 10th. He was the fifth child, born to Anne Byrne Crotty, a native of Dundalk, Ireland and John Michael Crotty, a native of San Francisco. The John Mike Crottys settled in San Francisco where Fran (as he was called) attended Sacred Heart Grammar School, St. Ignatius and Lick Wilmerding High Schools before entering the US Air Force. Fran served 4 years in Korea. When he returned home in 1957, he joined the California Highway Patrol. He was assigned to duties in San Francisco, Los Angeles, Oakland, and finally Napa. On St. Patrick's Day, 1962, he met 'Maggie' McGee while playing the bagpipes in Harrington's on Jones St. They were wed in 1964 in Barrington, Ill. He and Margie moved into a vintage Victorian home in San Francisco's Eureka Valley There they welcomed: Matthew, Christopher, Brigid, Megan, and Rebecca. Baby Molly (Anna Mairin) was born in Burbank while Fran was serving as sergeant. While in San Francisco, Fran showed his talent for activism, especially when the issues involved Catholic Church teaching, traditional family and the unborn. He served as Parent-Teacher President at the local parish when his own children were only toddlers. There he founded the "Famly League of San Francisco," helped form the "Pro-Life Council of California," United for Life, San Francisco" and the "Santa Clarita Valley Action League" while living in Valencia, Ca. Fran never gave up his dream of founding a private Catholic School. For 20 years he searched sales for student desks "for the school." Finally, in the fall of 1980, Kolbe Academy was co- founded, thanks to the hard work and dedication of the Muth and Cortese families. Within a short time, Fran said farewell to the Hwy. Patrol and gave full time to administrating the school, which he did until 2001. Children Chris, Brigid, Megan, Rebecca and Molly graduated from the Academy. First born, Matthew had died in his second year. His pro-life passion carried on with "Operation Rescue," and later, "Napa Valley Culture of Life," and "40 Days for Life." He was a regular prayer warrior in front of the local Planned Parenthood. There were other activities as well. Fran was a long-time member of the Knights of Columbus, formed the Latin Mass Group, co-founded the Kolbe Academy Home School and served as President of the Kiwanis Group of the Greater Napa Valley. All the while, his heart belonged to his family. He is predeceased by his son, Matthew Anthony, his parents John and Anna Crotty; his brothers, Bernard, Jack and Kevin; his sisters, Barbara and Anne; his sisters-in-law Pauline, Joan, Jean: his brother -in-law Bill. He is survived by his wife Margaret, his children Fr. Christopher, Brigid, Megan and Sean Breen, Rebecca and Jeff Feeney, and Anna (Molly) and husband Michael Francisco. His grandchildren are Nadia, Maya, Gianna, Augustine, Jocelyn, Emmanuella, James, Elizabeth, Hannah, Joe Pat, and Maggie. Their great grandchild is Florence. He is also survived by brothers-in-law; Kim McGee and wife Mary, John McGee and wife Alice, David McGee and wife Jean, and Peter McGee and wife Veronica; sister-in-law Kathleen and husband Michael Finn. Fran had countless nieces and nephews, great nieces and great nephews from California, Arizona, Illinois, Minnesota, Nebraska, Colorado and Florida. His earmarks were his faithfulness, courage and vision. There will be a rosary at Kolbe Academy-Trinity Prep chapel at 2055 Redwood Rd. on Thurs. 12/13 at 7:30 p.m.. The funeral Mass with be held at St. Apollinaris Church at 3700 Lassen on Friday, 12/14 at 11:00 a.m. Donations may be made to Kolbe Academy-Trinity Prep.

Francis Anthony Crotty passed from this life with his dear family nearby on Monday, Dec. 10th. He was the fifth child, born to Anne Byrne Crotty, a native of Dundalk, Ireland and John Michael Crotty, a native of San Francisco. The John Mike... View Obituary & Service Information

The family of Francis Anthony Crotty created this Life Tributes page to make it easy to share your memories.

Francis Anthony Crotty passed from this life with his dear family...

Send flowers to the Crotty family.