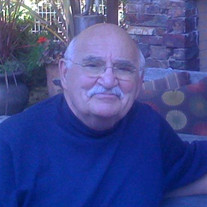 After living a long and fulfilling life, Gene passed away peacefully in his home of 66 years. He was surrounded by family and enveloped in their love. He was born March 23, 1925, to Silvio and Marie Escalle Tonascia. A Napa Valley native, Gene spent his childhood in Yountville, attending Yountville Grammar School and serving as an altar boy at St Joan of Arc Catholic Church. He often described his boyhood in Yountville as "Tom Sawyer-like" and greatly enjoyed telling the stories of his youth. He attended Napa Intermediate School (the old Polk Street School) and was a graduate of Napa High School, class of 1943. During his four years at Napa High, his accomplishments were many. He played four years of Varsity baseball and was Captain of the '42- '43 team. He was the Varsity halfback on the football team during his Junior and Senior years and was voted Most Valuable Back of the '42-'43 season. He was the recipient of the School Blanket Award. This award signified the accumulation of at least 84 total points for athletic achievement. Of note, he was the second recipient of this award in the school's history. Other honors included the Boy's State Award and he served as Student Body President during his Senior year, '42-'43. After the creation of the Napa High School Athletic Hall of Fame, he was voted in as an inaugural member. After graduation, Gene's goal was to become a naval aviator. He enrolled in the St Mary's pre-flight training program and also studied at St. Olaf's College in Minnesota. During the war, he became a commissioned naval aviation officer and flew off of the US Princeton- 37. When the war ended he returned home to Yountville to marry the love of his life, Barbara Bryant. During that time he made the decision to settle in Yountville and help his father with the family business, Tonascia's Market. The market was built in 1916 by his father and uncle. The business remained in operation, with Gene as the sole proprietor, until his retirement in 1983. During his long and well-deserved retirement, he enjoyed spending time with his family, playing golf, gardening, and rooting for the San Francisco Giants and the San Francisco 49ers. Tonascia's Market was located in the north end of Yountville, in the same building where Ciccios's restaurant now stands. Over the years, Gene became a Napa Valley historian, easily recounting the names, stories and chronology of life in Yountville. When he was 90 years "young", he was interviewed by the Yountville newspaper. An entire page of the paper was filled with his recollections of old town Yountville and days gone by. To many, he was an unofficial Mayor of the town. Gene was predeceased by his parents, Silvio and Marie Tonascia, a son Barry Tonascia, his brother Richard Tonascia, and his beloved wife of 58 years, Barbara Bryant Tonascia. His survivors include, daughters Sharon Tonascia Baker and Michele Tonascia Stanley, son Bruce B. Tonascia, son-in-law E. Glynn Stanley Jr, daughter-in-law Cindy Tonascia, grandchildren Aimee Baker, Edward Stanley and partner Liane Elshere, Christina Stanley, Nicholas Stanley, Sam Tonascia, Lexi Tonascia, greatgrandchild Violet Stanley, sister-in-law Louise Tonascia, nieces Carol Tonascia Reardon, Karen Tonascia and Judy Tonascia Guier, cousin Virginia Crowe and long time friend and companion, Dee Boisvert. Thank you for setting the bar so high, dear Daddy. Through your example, we learned how to take the high road. When the body fades, the spirit soars. Godspeed. Per Gene's wishes, there will be no services.

After living a long and fulfilling life, Gene passed away peacefully in his home of 66 years. He was surrounded by family and enveloped in their love. He was born March 23, 1925, to Silvio and Marie Escalle Tonascia. A Napa Valley native, Gene... View Obituary & Service Information

The family of Eugene Tonascia created this Life Tributes page to make it easy to share your memories.

After living a long and fulfilling life, Gene passed away peacefully...

Send flowers to the Tonascia family.