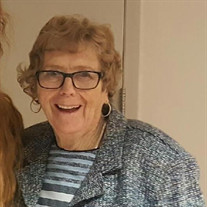 It is with great sadness that we announce the passing of our beloved Elizabeth (Betty) Alida Van Winden on July 2, 2017. Betty was born to Koos and Bets Bontje on June 14, 1931 in Leidschendam, Netherlands. She was the 10th of 13 children, and was the last to go be with our Lord. Betty and her family experienced the ravages of WWII, and in 1949 they moved to Toronto, Canada. Betty earned her Nursing degree in Toronto, and worked as an Obstetrics RN on a remote Native Canadian Indian Reservation in Manitoba. In 1956, Betty wanted to move to a warmer climate, and came to Napa. Her parents had suggested that she meet with family friends from the Netherlands and it was then that she met Adrian Van Winden. After Adrian was drafted into the army in 1957 and prior to being sent to Germany, they became engaged at the top of the Empire State building. Betty than moved to Germany to be closer to Adrian and worked in the 7th US Army Hospital. Betty and Adrian were married on August 20th, 1958 in Zoeterwoude, Netherlands. In 1959 they moved back to Napa, where Betty worked at the Queen of the Valley Hospital. She took time off from nursing to raise their children, Lesette, James and Sonja. She then worked part time as the school nurse at the Christian Brothers boarding school at Mont La Salle. She also worked with Adrian at their Van Winden Landscaping business. Betty enjoyed spending time with her family and wide circle of friends, playing cards and Mahjong. She was a member of PEO and volunteered at the Napa Kaiser Clinic for many years. Betty enjoyed traveling with family and friends throughout the US and Canada by motor home and experienced many worldly adventures with Adrian on cruises. Betty had a feisty sense of humor even during her illness and was always able to make people laugh. Betty is survived by her husband of nearly 59 years, Adrian, her daughter Lesette, son James (Kelly), and daughter Sonja Miller. Also grandchildren Robbie (Blair) Miller, Ian Miller, Adlee & Torrey Van Winden, and great-grandson Brayden. Betty was preceded in death by her parents and her siblings Aad, Maxine, Riet, Bill, Gerald, Kees, Henk, Tom, John, Jack, Len, and Piet. The family wishes to thank the staff at Kaiser Hospital in Vallejo and Collabria Hospice. A rosary will be held at St. Apollinaris Catholic Church on Thursday, July 6, 2017 at 7:00pm. A funeral Mass will be celebrated at St. Apollinaris Friday, July 7, 2017 at 10:00am with a reception to follow at the Napa Elks Lodge.

It is with great sadness that we announce the passing of our beloved Elizabeth (Betty) Alida Van Winden on July 2, 2017. Betty was born to Koos and Bets Bontje on June 14, 1931 in Leidschendam, Netherlands. She was the 10th of 13 children,... View Obituary & Service Information

The family of Elizabeth Alida Van Winden created this Life Tributes page to make it easy to share your memories.

It is with great sadness that we announce the passing of our...