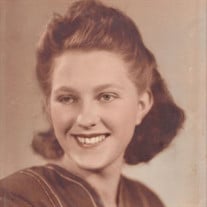 Elizabeth (Betty) May Saunders, age 93, died peacefully on December 30, 2017 in Napa, California. Miss Betty was born on September 24, 1924 in Eagle Town, OK to mother Ruby Lee Daniel and father John McMahon. Betty married Kenneth Job Saunders on September 5, 1938 in Tonopah, Nevada. A rancher, dairyman, casino cashier, and a farmer, Betty raised 3 children, Larry and Helen Saunders and one grandchild, Bradley Saunders. Betty’s early childhood was spent in Oklahoma. With parents of modest means, the family was supported by the moonshine trade until her father passed. Seeking a better life, her mother Ruby remarried and moved the family to California. It was there that Betty met Kenneth Saunders from Benton, CA. They were married in 1938 and lived in Bishop CA. During WWII, Kenneth enlisted in the army and moved Betty and their two children to Chico CA. After the war ended and Ken's honorable discharge, Ken and Betty became almond growers and dairymen in the Chico Area. In 1965 they took a vacation to South Lake Tahoe and, while there, Ken applied for a job at Harrah's. He was quickly hired followed by Betty being hired in 1967 as a casino cashier. That began a wonderful 10 year adventure as they called it "Living in Paradise". Along the way they purchased ranch properties in Coloma, Red Bluff and Marysville. After retiring from Harrah's in 1977, they moved to the ranch in Marysville. There they grew prunes, oranges and walnuts. In 1979 they replace the prunes with kiwi and were very involved with the burgeoning kiwi industry. In the early 1980’s, Betty and her husband Kenneth helped to found the Grass Valley and Chico Farmers Markets. Known for growing the best kiwi, roses, walnuts and peaches, Ken and Betty built a happy and long standing social life around the people at the Farmers Market. Among family and friends, Betty was also known for cooking for hours, to host any and every celebration. In particular, her secret recipe, chocolate dipped almond cookies were almost as treasured as Miss Betty. Survived by her sister Bobbie Parker of Arizona, 4 grandchildren, Bradley, D. Saunders of Napa, Stacy Harrison and Cara Bibee of Carson City, and Charity Palmer of Red Bluff, 10 great-grandchildren: Zachary, Brandon, Alicia, Ty, Thorne, Foster, Whitney, Wren, Garrison, Lara, and 1 great, great granddaughter, Lanee. Elizabeth was preceded in death by her daughter Helen, husband Kenneth, and son Larry. Memorial donations may be made to Collabria Care in Napa.

The family of Elizabeth (Betty) May Saunders created this Life Tributes page to make it easy to share your memories.

Send flowers to the Saunders family.