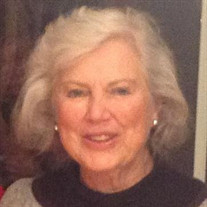 Eleanor (Ellie) Kimbrough – 1928-2017 Ellie passed away on February 16, 2017 peacefully with family by her side. Born in Napa on December 15, 1928 to Albert & Eleanor Lallement, she attended local schools. Ellie graduated from Napa High School in 1946. It was there she met the love of her life, high school sweetheart, and future husband Rex. They were married on August 18, 1950. Ellie had a long career working for Napa County in the Clerk’s Office and eventually became the Recorder for Napa County, a position she was reelected to several times. Ellie retired from county government holding the position of County Clerk/Recorder in 1990. Ellie enjoyed performing marriage ceremonies as one of her duties while County Clerk and continued to do so after leaving office. Ellie performed the wedding ceremony for her oldest grandson Keith and his wife Amanda on August 18, 2012, her and Rex’s 62nd wedding anniversary. Ellie was very active in sports over the years including skiing, tennis, and later became an avid golfer, playing often with Rex and with the women groups at Kennedy Park Golf Course and Silverado Country Club. Ellie enjoyed spending time with family and friends at the cabin she and Rex had built at South Lake Tahoe. Ellie went on many trips around California and the west coast, some were to California Recorders Conferences as well as trips to Australia, Japan, and Europe. She also attended several U.S. Open Golf Tournaments across the United States and enjoyed trips to Hawaii. Over the past few years annual trips to Sun River, Oregon and Palm Springs were a highlight of the year. Ellie was a member of several organizations including Native Daughters of the Golden West, Soroptimist International of Napa, and the Napa Chamber of Commerce. Ellie is survived by her husband, Rex of Napa, sister, Sally of Rancho Murieta, son, Kriss (Maureen), of Napa, daughter, Staci (Eric) of Red Bluff, grandsons, Keith (Amanda) of Napa, Nicholas (Jessica) of Cordelia, Trent of Eugene, Oregon, and Garrett of Napa, great grandson Skyler of Napa, and great granddaughter Penelope of Napa, nephew Todd Lallement and niece Lori Petrovsky. Ellie was predeceased by her parents, Albert and Eleanor Lallement, brother and sister in law, Bert and Betty Lallement, mother in law, Fern Brown, and brother in law, James Paravantes. She was a devoted mother, grandmother, and great grandmother, and loved all of her family and friends. There will be a Celebration of Life for Ellie on March 1, 2017 at 3:00PM in the Augusta Room of the Member’s Clubhouse at Silverado Country Club, 1600 Atlas Peak Road, Napa. Donations to Queen of the Valley Foundation, Collabria Care Napa, or a charity of the donor’s choice.

Eleanor (Ellie) Kimbrough &#8211; 1928-2017 Ellie passed away on February 16, 2017 peacefully with family by her side. Born in Napa on December 15, 1928 to Albert & Eleanor Lallement, she attended local schools. Ellie graduated from Napa High... View Obituary & Service Information

The family of Eleanor (Ellie) Kimbrough created this Life Tributes page to make it easy to share your memories.

Ellie passed away on February...

Send flowers to the Kimbrough family.