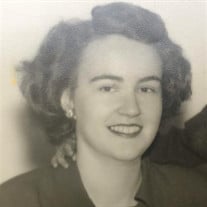 Mrs. Dorothy Shepard Peters passed away on August 9, 2018 in Napa, California. She was 91 years old. Dorothy was born in San Francisco October 7, 1926. She was one of four children born to Al and Cleo Payne. She graduated from Notre Dame High School in San Francisco. It was in San Francisco that she met Tom Shepard who was serving in the U.S. Coast Guard, in 1944. Dorothy and Tom married and raised 4 children. They lived in San Francisco, Rocklin, Loomis and Sacramento before moving to Fairfield and then settled in Napa. They were married for 55 years before Tom passed away. Dorothy worked at the Shelter for Adults with Disabilities on Brown St. in Napa. She had a real talent for relating to the handicapped, and she enjoyed being their teacher. She eventually became the Director of this facility. She also worked for the Pacific Bell Telephone company as a long distance operator for several years after leaving the Shelter. After Tom passed away, Dorothy met Jack Peters at the Singles Group at St. Apollinaris church in Napa. Later they surprised their children by announcing that they were going to get married. Even after their marriage, they remained honorary members of the Singles Group. They enjoyed being active in the church choir, and they took many trips and several cruises. Before Jack passed away they enjoyed thirteen years together. Dorothy loved to travel. She traveled throughout the United States and Canada with Tom then Jack. They had a regular group of friends, the “Terrible Ten”, who took trips together over the years. She also enjoyed playing the piano, and she gave lessons to several of her grandchildren. She also composed poetry, and several of her poems were published in local newspapers throughout the years. Dorothy was always interested in learning. She was usually taking a class or two, and she was always well read. She said her mom always told her: “Dorothy get your nose out of that book.” As a mom she loved to read to her children daily. They had a whole collection of Little Golden Books. And this was before it was popular to spend time reading with your children. Dorothy was a devout Catholic. Throughout her life she was very active in her church community. She volunteered in her women's group and she participated in several others. She was a member of the St. Apollinaris Bell Choir playing the bells and singing. Dorothy was a Third Order Carmelite, Oakville, CA. Belonging to the Elks was an important part of her life. There were many worthwhile philanthropic activities, and lots of fellowship. Dorothy was a member of the Emblem Club, the ladies of the Elk, and she even became their president. We proudly watched her installation which included some very fancy floor work. She was also a member of the TOPS club and she was named Queen after having reached her goal. Dorothy was a very social person. She gathered a large circle of friends in her life, and unless she had just recently met them, they were all dear friends. She had a great talent for staying in touch. She kept many friends she met during her childhood, as well as friends she met as co-workers from jobs 70 years ago. At Christmas time she covered the dining room wall with cards received. Dorothy lived a very fulfilled life. She thoroughly enjoyed being a wonderful wife, mother and grandmother. Dorothy was preceded in death by her parents Al & Cleo Payne, her Brother Robert Payne, her son Larry Shepard and her two husbands, Tom Shepard and Jack Peters. Dorothy is survived by two sisters, Beverly Ward who resides in Rancho Cordova, CA and Joyce White, Auburn, CA, son Jerry Shepard (Pam) Cameron Park, daughters Chris Brown (Larry) Napa, CA, Janette Shepard-Sprengelmeyer (Steve) Napa, CA five grandchildren and five great grandchildren. She has many nieces and nephews from California to Illinois. The family wants to especially thank the staff at Berkshire Assisted Living Home and Kaiser Hospice. Both of these agencies provided outstanding care and support to our mother and family. A Rosary service will be held Thursday, August 16 at 6:30pm at Claffey & Rota Funeral Home, 1975 Main Street in Napa. Funeral Service Mass will be held at St. Apollinaris Catholic Church on Friday August 17 at 11am. A reception celebrating Dorothy's life will be held in the church hall after the funeral. In lieu of flowers donations in Dorothy's name can be made to St. Apollinaris Church, Napa, CA, Kaiser Hospice or a favorite charity of your choice.

Mrs. Dorothy Shepard Peters passed away on August 9, 2018 in Napa, California. She was 91 years old. Dorothy was born in San Francisco October 7, 1926. She was one of four children born to Al and Cleo Payne. She graduated from Notre Dame High... View Obituary & Service Information

The family of Dorothy V. Shepard Peters created this Life Tributes page to make it easy to share your memories.

Send flowers to the Shepard-Peters family.