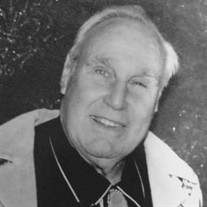 Clinton Roy Pridmore born December 4, 1937 in Napa, California to Joseph Roy Pridmore and Martha Ella (Bartley) Pridmore. He was the fifth generation to be born and raised in Napa, on the family ranch in Capell Valley. He lived, worked, and raised his family on the ranch for the entirety of his life. This legacy has been carried on by his children and grandchildren, which was something he thoroughly enjoyed. Clint married Nancy Lee Wright on October 12, 1957. They raised three sons, Gil Cory, Kelly Dean, and Darryl Clinton; all whom remained in Napa. They carved a wonderful life out for their family through hard work, perseverance, and ingenuity; starting a general engineering construction business with his brother/ sister-in-law, Pridmore Brothers Construction. Clint and his brother Don played a big part in developing Lake Berryessa and surrounding areas. Growing up on his family ranch, Clint held a deep appreciation for conservation of land and wildlife. He served on the Resource Conservation District Board for over 30 years, holding the president seat for many terms. Through his lifetime he spent countless hours creating water/ feed sources for wildlife and maintaining access to the family ranch. He taught his children and grandchildren to be caretakers of the land and to enjoy the benefits of spending time in nature. Clint made many friends throughout the nation through his trapshooting endeavors. He was a champion trap-shooter since the late 1970’s with credits in vast circles. This was a sport he enjoyed with his children and grand-children whereby they were able to travel the world from South America, Mexico, Hawaii, Alaska and Europe for events. His love of the sport was passed along through his other passion, hunter safety, of which he instructed generations of students. He was a member of the Martinez Gun Club, and the Napa Gun & Pistol Club through most of his life. He was also a lifetime member of the Safari Club International and many other conservation groups. Perhaps his greatest accomplishment was instilling his values and sense of family into the three generations that have come during his lifetime. He truly enjoyed his family and watching them grow up in such close proximity. He was able to be apart of his grand-children’s lives and later his great-grandchildren. His nieces and nephews and their children were as much a part of his family and apart of the joy as his own. Clint is survived by his wife Nancy of 58 years, their three sons Gil (Cathy), Kelly (Susan), and Darryl Pridmore, 7 grandchildren Cori (Casey) Carlson, Cameron (Brenna) Pridmore, Candice (Bill) Howden, Clinton (Alice) Pridmore, Austin (Lacey) Pridmore, Whitney Pridmore, and Joe Pridmore, 8 great-grandchildren; as well as many nieces & nephews, great nieces & nephews, and cousins. As per Clint’s wishes, there will be not be a funeral or memorial.

Clinton Roy Pridmore born December 4, 1937 in Napa, California to Joseph Roy Pridmore and Martha Ella (Bartley) Pridmore. He was the fifth generation to be born and raised in Napa, on the family ranch in Capell Valley. He lived, worked, and... View Obituary & Service Information

The family of Clinton Roy Pridmore created this Life Tributes page to make it easy to share your memories.

Send flowers to the Pridmore family.