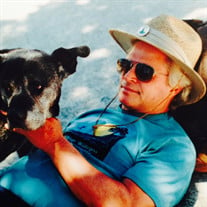 Christopher McCluer 1950-2014 Christopher McCluer, born Jan. 31, 1950, in Inglewood, California, passed away peacefully at the family’s home in Vallejo, California, on Sept. 15, 2014. He was the son of the late Robert Neil McCluer and Pauline McCluer, who survives. Chris grew up in Whittier, CA, but spent most of his adult life in the Napa Valley where he began a life long career in education. He was honored to receive many awards of service as an educator and community leader. Chris was respected and beloved by students, teachers and administrators. His emphasis on serving at risk populations is a testament to his kind and loving nature. Chris was an advocate for peace and a protector of the environment, a man with political beliefs he fought for, a lover of the outdoors, especially the Sierra Nevada Mountains. In spirituality, he practiced meditation and found God in Nature. He had a tremendous appreciation for music and lived the ideals of the Grateful Dead. His love for the 49ers, Giants, and Warriors were unparalleled. Above all else, he loved his wife, children, family and friends. His adventurous spirit and desire for peace live on in all who knew him. “I only went out for a walk and finally concluded to stay out till sundown, for going out, I found, was really going in.” ― John Muir A memorial service will be held at the Pelusi Building at the Kennedy Park entrance, 2296 Streblow Drive, onSunday, Sept. 28. In lieu of flowers, donations can be made at the service to the Valley Oak Memorial Scholarship Fund.

The family of Christopher McCluer created this Life Tributes page to make it easy to share your memories.

Send flowers to the McCluer family.