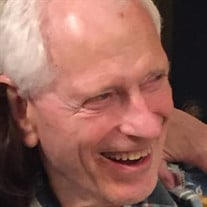 Charles Arthur Reiland was born in Illinois in 1937 and was the oldest child born to Charles Henry Reiland and Louise Reiland. Chuck was very fortunate to have a gentleman mentor him. At the age of ten he was picking crops for Ted Lau who taught him to milk cows and build cars. His chosen profession was to farm in his teenage years. At the age of twenty he was farming 20 acres of tomatoes and hauling his crop to Libby’s where it became “stewed tomatoes.” Chuck, during these formative years, changed his mind- he loved working on cars and this would become his new profession. He owned his first car, a 1949 Ford, at the age of 15, and he earned this from farming. This work gave him a healthy self-esteem. Everyone that knew him called him “Riley” after William Bendix, “The Life of Riley.” In 1960 Uncle Sam drafted Chuck to various locations in the United States and his favorite place was Monterey, California. His years in the Army preceded Viet Nam and the Bay of Pigs incident under President Kennedy. Gerry and Chuck met after his basic training in 1960. Gerry knew Chuck’s sister, Virginia, and they met at church. In 1961, in the month of May, the newlyweds headed to California where they would enjoy Northern California in Monterey. Fort Ord was where he became a company clerk. He should have worked on tanks so life in the army was like being in jail to Chuck Reiland. 1962 is the year that the Reiland family moves back to Illinois and the first born child, Donna, flies on an airplane at the age of two weeks. 1963 Diane arrives and Chuck is working at an auto body shop in South Holland, Illinois. 1965 along comes Dan and in 1967 Denise. In 1971 the Reiland family journeys to Napa, California and Chuck’s dream becomes a reality. He opens Soscol Auto Body in 1972 and retired in 2006. Kiwanis Club of Greater Napa was his pleasure for 40 years. His project was the East-West Football Classic and shared this honor with the Police Activities League with Mike Kollar. Year after year many families attended the All-Star Football Classic. When Chuck had a stroke in 2018 his greatest challenge began. This stroke left him unable to walk or talk, but he always had his sense of humor. He entertained everyone with “big eyes” and occasionally a roar of laughter. Every member of his family will treasure the man that lived the way that he believed- God, family and his work. Chuck passed on January 3rd with his children present, loving him in to heaven. He is survived by his wife, Gerry Reiland; his children Donna (John) Lickley, Diane (Brian) Dixon, Dan (Irene) Reiland, and Denise Reiland. He is also survived by his grandchildren; Andrew, Lynette and Dalton, sister Virginia Banks and Don Reiland in Illinois and Indiana. He was predeceased by his grandson Michael. In lieu of flowers please donate to St. Thomas Church, 2725 Elm St, Napa, CA 94558, or Collabria Care, 414 S. Jefferson Street, Napa, CA 94559.

Charles Arthur Reiland was born in Illinois in 1937 and was the oldest child born to Charles Henry Reiland and Louise Reiland. Chuck was very fortunate to have a gentleman mentor him. At the age of ten he was picking crops for Ted Lau who taught... View Obituary & Service Information

The family of Charles A. Reiland created this Life Tributes page to make it easy to share your memories.

Charles Arthur Reiland was born in Illinois in 1937 and was the...

Send flowers to the Reiland family.