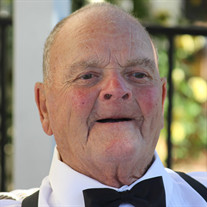 Carl Sciambra, 83, passed away on December 12, 2017, the Feastday of Our Lady of Guadalupe, in Napa, California. He was born on February 20, 1934 to Anthony and Placida Sciambra in Contessa Entellina, a small town outside of Palermo, Sicily. He was preceded in death by his parents, his brother Giuseppe Sciambra of Contessa Entellina, and sisters Nicolena Maggio of New York City, and Antonia Grimmer of Napa. Carl is survived by his wife of fifty-nine years, Barbara, their children, Patricia Spears, Michael Sciambra, Antonia Williams, and Joseph Sciambra, his grandchildren, Jacob Spears, Bailey Tercero, Michelle Sciambra, Patricia Williams, Michael Sciambra Jr., and Chad Williams Jr., sons-in-law Greg and Chad, daughter-in-law Pamela, and numerous nephews and nieces including his godson Steven Grimmer. Carl grew-up in an agricultural area of Sicily where his family owned vineyards and a farm. In his hometown, he served as an altar boy and first developed his great devotion to the Blessed Mother of God, in particular to the local miraculous statue of the Madonna Della Favara. His uncle and godfather, Matteo Sciambra, was a well-known Byzantine rite priest and historian. In 1952, Carl followed his sister Antonia and emigrated to the United States, settling in the San Francisco Bay Area where his mother’s relatives resided. He worked in a number of local bakeries in Vallejo, Redwood City, and in Sacramento where he married his wife Barbara Woodard in 1958. In 1974, Carl bought the former Passini Bakery and it remained at its original Vallejo location until 1981 when he moved to Napa. Carl operated and expanded the business for many years, with the help of his wife and family, before retiring in 2001. Until his passing, Carl remained very busy developing and maintaining vineyard properties in Pope Valley and on Atlas Peak. Carl was also a self-taught winemaker, bottling his own private label. Carl maintained a lifelong devotion to the Catholic Church, the Rosary, and to Saint Joseph. For a number of years, he hosted an annual Saint Joseph Day Dinner benefitting the needy of the area and he organized a weekly Rosary prayer group at his home. Later in life, despite ill health, Carl persisted in a faithful routine of daily prayer. He greatly enjoyed the company of family and friends, especially over a meal and a glass of wine, and he treasured time spent with his grandchildren. A Rosary will be recited for the repose of his soul on Monday, December 18th, at 7:00pm at Saint John the Baptist Catholic Church in Napa, and a Funeral Mass will be offered on Tuesday, December 19th, at 10:00am also at Saint John the Baptist Church. In lieu of flowers, please make a donation to the Marian Sisters of Santa Rosa, P.O. Box 1297, Santa Rosa, CA, 95402, or Kolbe Academy and Trinity Prep School, 2055 Redwood Road, Napa, CA, 94558.

Carl Sciambra, 83, passed away on December 12, 2017, the Feastday of Our Lady of Guadalupe, in Napa, California. He was born on February 20, 1934 to Anthony and Placida Sciambra in Contessa Entellina, a small town outside of Palermo, Sicily.... View Obituary & Service Information

The family of Carl Sciambra created this Life Tributes page to make it easy to share your memories.

Send flowers to the Sciambra family.