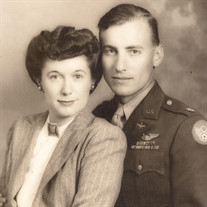 Blanche Harmon Keilman What a life. It began on September 24, 1916 in Panhandle, Texas daughter of Rollie Guy and Malvina Jane Harmon. By her high school years, her family move to Amarillo, where she graduated from Amarillo High School at the age of sixteen. She attended Amarillo Junior College, before her family moved to Clovis, New Mexico. She worked as a clerk at Clovis Army Air Field, where she met Myron Keilman, who was helping form the 392nd Bomb Group (H), which was equipped with B-24s. They were married on the June 26, 1943, just before Myron deployed with the 392nd to England. Myron flew twenty-five missions with the 392nd , took a leave in October 1944 to return Stateside, before returning to the 392nd and flew an additional eighteen missions before the war ended. After the war, Myron stayed in the Air Force. Then it was off to the races: There were assignments from Fort Walton Beach, Florida to Tokyo, Japan to Hickam Field, Hawaii to Rome, New York with stations in between. Myron would attain the rank of Colonel and they retired in Sacramento. Along the way, they had three children, Guy, Kathrine (who died soon after birth) and Geary. Myron and Blanche spent their retirement years rotating between their cabin on Holland Lake in the magnificent Swan Valley of Montana and Sacramento, with numerous journeys in between. Myron folded his wings on on February 13, 1998 and Blanche joined him March 11, 2016. What a team they were: Through fifty-five tumultuous years of marriage they made adjustments and gave Guy and Geary what so few children have nowadays: A whole family. Blanche is survived by her two sons, Guy and Geary; her two daughters-in-law, Mary and Laurie, and her granddaughter Annie and her one remaining sibling Helen Gene Harmon of Clovis New Mexico, as well as numerous numerous nephews and nieces as well as grand nieces and grand nephews. This is also a time of Gratitude. We would like to thank the Laura Sherwood and Iris Lopez and their caring and devoted staff at the Cedars Care Home in Calistoga, California. We would also like to thank the parishioners of Our Lady of Perpetual Help and the Sisters of Holy Assumption Monastery for their numerous visits with Blanche. Additionally, we appreciate Richard Hayman (RICHARDS) and Clive Richardson (CALISTOGA ROASTERY) for their courtesy and kindness that they showed Blanche. There will be a Rosary prayed for Blanche at 7:00 PM on Thursday March 17th at the chapel of Claffey and Rota at 1975 Main Street, Napa. A Funeral Mass will be offered at !:00 PM on March 18th at Calvary Cemetery, Sacramento. Donations maybe give to Our Lady of Perpetual Help, Calistoga, CA for the charity of one’s choice. Memories or notes of Sympathy

Blanche Harmon Keilman What a life. It began on September 24, 1916 in Panhandle, Texas daughter of Rollie Guy and Malvina Jane Harmon. By her high school years, her family move to Amarillo, where she graduated from Amarillo High School at... View Obituary & Service Information

The family of Blanche Harmon Keilman created this Life Tributes page to make it easy to share your memories.

Send flowers to the Keilman family.