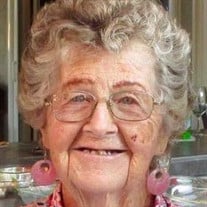 Beulah Tews passed away peacefully on December 1st 2017. She was 93 Beulah was born on July 19th 1924 in Clayton New Mexico to Jesse and Verna Salsman. Beulah was 12 years old when the family moved to California in 1936. A few years later the family settled in Napa, which became home for the rest of her life. Her brother Jesse brought his army buddy home for Christmas in 1946. She fell in love and they were married one year later. Beulah married Marvin Tews in 1947 at the original St. Johns Lutheran Church on 2nd street in Napa. They built their home on Morlan Dr. and raised 4 boys. During the war Beulah worked at Mare Island as a machinist. She was a telephone operator for Pacific Bell and the Napa State Hospital as well an independent Shaklee distributor. She retired from the State Hospital. Beulah and Marvin were one of the original founding families of Faith Lutheran Church of Napa. Beulah served faithfully on various church organizations including the Ladies Guild, and Lutheran Women’s Missionary League. Her love for gardening provided many a bouquet for the church alter She was a long-standing member of American Legion Post 113 Women’s Auxiliary holding various office positions though the years. During the Town and Country Fair she was in charge of the American Legion food booth. She also held offices for the VFW, and Pocahontas. Her love for crafting inspired her to create the Holiday Craft Fair at the American Legion hall which she ran for 20 years. Beulah liked to help others. She volunteered for Brown Bag and Meals on Wheels for many years. She loved to dance and often reminisced about the good times dancing at the Dream Bowl. Beulah is survived by her children: Dennis (Debbie), Ken (Sharon), and Steve (Toni). Grandchildren: Melissa (Raul), Justin (Amber), Tamara (Tim), Amanda, Sarah, Tiffany, and Ashley. Great Grandchildren: Raul, Gabriel, and Marvin. Sisters: Betty of West Covina California, and Barbara of Lancaster Wisconsin. Brother: Melvin of Long Beach California. She was preceded in death by her husband Marvin, son Douglas, brothers Worth, Jesse, and Tom and sister Eileen Beulah will be remembered for her kind and gracious heart. She was always looking out for family and friends and always putting their needs ahead of hers. Memorial services are Tuesday December 19, 2017 11:00 a.m. at St. Johns Lutheran Church, 3521 Linda Vista Ave. Napa. There will be a gathering immediately following the service at St. Johns Lutheran Parish hall to share memories and celebrate Beulah’s life. Donations in Beulah’s name can be sent to Meals on Wheels.

Beulah Tews passed away peacefully on December 1st 2017. She was 93 Beulah was born on July 19th 1924 in Clayton New Mexico to Jesse and Verna Salsman. Beulah was 12 years old when the family moved to California in 1936. A few... View Obituary & Service Information

The family of Beulah Tews created this Life Tributes page to make it easy to share your memories.

Beulah Tews passed away peacefully on December 1st 2017. She...

Send flowers to the Tews family.