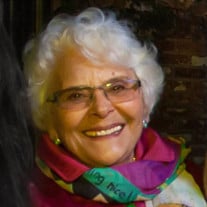 In the loving presence of her children and grandchildren, Bernice Theresa Bettencourt, with peace and her magnetic smile, left us on January 6, 2018. She is greatly missed. Bernice was born in Napa on February 28, 1930 to Nelson and Josephine Bettencourt. Sister to Nelson and Mervin Bettencourt. She arrived with a spirit composed of bravery, generosity, creativity and joy which lifted and delighted all who knew and loved her. She was a lifelong resident of Napa where she raised her 6 children Jayne Bethard, Nelson Braby, Janine Beard, Vincent, Matthew and Ross Braby. Sorrowfully her daughter Jayne and son Vincent preceded her death as well as her older brother Nelson. She is survived by her children Nelson (Beth), Janine, Matthew and Ross; grandchildren Bartholomew, Thaddeus & Nathaniel Bethard, Caitlin & Vincent Beard, Joshua Braby, Rachel &Tatum Braby; great-grandchildren Josephine, Parker, Saoirse Bethard & Skylar Braby. She is also survived by her brother Nelson’s wife Mary Bettencourt and their children Valerie Grinsel, Michela Euser, Caroline Gerlomes, Katie Batt and Nelson Bettencourt “the 3rd”; brother Mervin (Carol) Bettencourt; cousin June Wisecarver, and many more extended family members and friends. She earned her Bachelor and Master Degree’s in Education from Sonoma State University and was devoted to the values of education, teaching, and creating a learning environment. Her career in education began at St. John’s Catholic School teaching 4th grade and serving as the school’s Principal for 6 years. To this day, former students fondly recount to us the tender and enthusiastic classroom Mrs. Bettencourt created for their young hearts and minds. Following St. Johns, she continued her service and contributions to Napa’s educational foundation working within the Napa County Office of Education. For over 20 years, she served as Head Administrator in the development and oversight of the NCOE’s Early Childhood Education Program. She was a master seamstress who with envious speed and skill would have herself, daughters and family members outfitted in the latest style. She was known as a shrewd bidder and favorite partner in the card game Bridge which she played throughout her life. But above all other hobbies, she was a tournament tough tennis player who played the angles well into her 80’s. A Rosary will be held at Claffey and Rota Funeral Home, Thursday January 25th at 7:00pm. Private memorial service will be held. In lieu of flowers donations can be made to: The Teachers Resource Center of the North Bay at: http://teacherresourcecenter.org/index.php?option=com_content&view=article&id=13&Itemid=12

In the loving presence of her children and grandchildren, Bernice Theresa Bettencourt, with peace and her magnetic smile, left us on January 6, 2018. She is greatly missed. Bernice was born in Napa on February 28, 1930 to Nelson and Josephine... View Obituary & Service Information

The family of Bernice Theresa Bettencourt created this Life Tributes page to make it easy to share your memories.

In the loving presence of her children and grandchildren, Bernice...

Send flowers to the Bettencourt family.