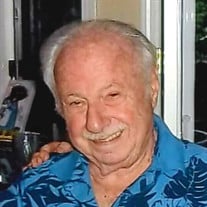 1932-2015 Bernard "Barney" Anthony Silveri Barney Silveri, 83, was born in Pennsylvania and moved to California when he was 13 years old. He graduated from Balboa High School and the University of San Francisco. He served in the army in Korea, operating a landing craft. This started his love of boating. He was a charter member of the Napa Valley Yacht Club and enjoyed many cruises to the Delta, the S.F. Bay and Monterey. In 1966, he moved his family to Napa and worked for Silverado Savings and Loan. In 1976, he founded Vintage Savings and Loan in St. Helena. Later he moved to the real estate business and owned Howe's Century 21. He invested in real estate and managed his own properties. He never really retired. He was always working on some project or another. Barney was an avid golfer getting up at 4:00 in the morning to tee off at the local courses. He loved to fish off his dock, and when fishing in Mexico, caught a marlin. He was a member of a number of service clubs. He was also an avid fan of the Warriors and Giants. He died peacefully from kidney failure due to diabetes on October 21. His wit and humor and buying for the bar will be missed. He leaves a loving family, his wife of 59 years, Evelyn; daughters, Karen Silveri-Spear (Joseph) and Sharon Silveri (Carol Kinney); five grandchildren, Joseph Spear (Holly), Tyler Spear, Emily Rogers, Grant and Owen Silveri; nephew, Leonard Silveri (Jennifer) and his bright red truck and beautiful boat. We thank you all for the wonderful care he received at the Queen of the Valley and the Napa Valley Care Center. A memorial service service will be held on Saturday, November 14 at 1:00 PM at Claffey and Rota Funeral Home, 1075 Main Street, Napa. Donations in memory of Barney, can be made to the Salvation Army, Napa Corps Donation Processing Center, P.O. Box 60009, Prescott, AZ 86304-6009, or St. Jude Children's Research Hospital, 501 St. Jude Place, Memphis, TN 38105.

1932-2015 Bernard "Barney" Anthony Silveri Barney Silveri, 83, was born in Pennsylvania and moved to California when he was 13 years old. He graduated from Balboa High School and the University of San Francisco. He served in the army in Korea,... View Obituary & Service Information

The family of Bernard Anthony Silveri created this Life Tributes page to make it easy to share your memories.

Send flowers to the Silveri family.