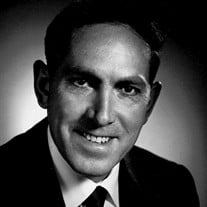 Bernard V. Lopez died in his home in Napa, CA on March 4th, 2016 at the age of 91. Bernard is survived by his sister Sara Scherer of Walnut Creek, CA; his brother Raymond Lopez (Alicia) of Winters, CA; his sons Stephen of Walnut Creek, CA; Lauren (Mary) of Elm Grove, WI; Matthew (Barbara) of Clayton, CA; and Dana (Ann) of Napa, CA. He is preceded in death by his wife Laura and his sisters Carmen Lopez and Clementine Loder. In addition, he is survived by his grandchildren Anne, John Paul, Timothy, Madeleine, Emmelia, Catherine, Annalaura, Laura, Ronald, Joseph and Leah Lopez and one great grandchild on the way. Bernard, a first generation American, was born on January 1st, 1925 in Vacaville, CA to Baldomero and Julia Lopez. He graduated with honors from Winters high school in 1943 as President of his senior class. Bernard was a technical sergeant in the European theater in WWII and flew 35 missions as tail gunner then Navigator in a B-17 bomber named “Sweet Dish.” Proud of his service, he considered this to be one of his greatest achievements. He met Laura, his wife of 57 years, while working for the Bank of America where he eventually became Vice President of Loss Operations. He retired early from the Bank only to put his heart and soul into an apartment business he owned and managed until his retirement at age 85. Truly a self-made-man, he exemplified the American Dream. A rosary will be said at Claffey and Rota Funeral Home Tuesday March 8 at 7 PM and a funeral mass will be held at Saint Apollinaris in Napa at 11 am on Wednesday, March 9th. Father Thomas will officiate. Burial and reception will follow in Winters, CA. All are welcome to attend and celebrate Bernard’s life. In lieu of flowers, donations can be made to the VFW, St. Apollinaris Parish or Napa Valley Culture of Life.

The family of Bernard V. Lopez created this Life Tributes page to make it easy to share your memories.

Send flowers to the Lopez family.