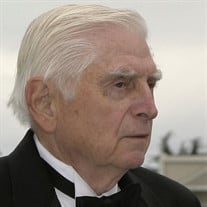 Anton E. Kubitschek, beloved father and uncle, passed away on October 2, 2016 at Wild Flowers Residential Care in Novato. He was born on December 2, 1923 in San Francisco. The first-generation Austrian-American graduated from Sacred Heart Cathedral Preparatory. He attended the University of California at Berkeley, studying forestry, until World War II intervened. Anton was deployed with the U.S. Army’s 44th Infantry to France. Anton was injured in battle and received the Purple Heart. In the run-up to the Battle of the Bulge, Anton was captured while attempting to set up communication lines forward of the troops. He was a prisoner of war for six months before being liberated by the Russians. After his discharge, he settled in southern California and was introduced to his future bride by a brother and sister-in-law. Anton returned to northern California and worked for over 20 years as an production controller at Rough Rider. He ended his working career as a letter carrier for the U.S. Postal Service in St. Helena. In retirement, Anton enjoyed fishing, gardening and was an avid fan of the San Francisco Giants and 49ers. For 20 years he held an annual “Kubibash” for family, neighbors and friends on Vineyard Lane. Anton is survived by his daughters, Theresa Kubitschek (Cecil Bowlin) of Santa Rosa and Karen Kubitschek (Michael Rihn) of Tiburon, and his nephews, niece, and many grand- nephews and nieces. He was preceded in death by his parents, his wife Marbarae, and his brothers and sisters-in-law, Franz and Lorraine Kubitschek, and Hans and Nancy Kubitschek. A funeral Mass will be held at St. Joan of Arc Catholic Church in Yountville on Saturday, October 8, 2016 at 10:00am. Burial, with honors, will follow at Tulocay Cemetery in Napa

The family of Anton E. Kubitschek created this Life Tributes page to make it easy to share your memories.

Anton E. Kubitschek, beloved father and uncle, passed away on...

Send flowers to the Kubitschek family.